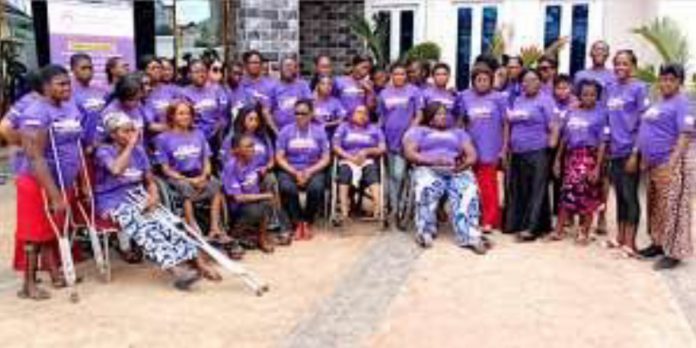 Women and girls with disabilities have called on government and other builders of public structures to factor in their convenience in their designs.

The call was part of outcome of a 3day training on Access to Justice for Women and Girls living with disabilities against sexuel and Gender-based violence in Abakaliki, Ebonyi State capital.

The event was organised by a Civil Society Organisation, Women Rights and Health project (WRAHP) with funding from the African Women Development Fund (AWDF).

The PWDs lamented the high level of deprivation, discrimination, neglect and stigmatization often meted on them by the abled public, adding that the design of most public institutions and buildings often hinder their access to common services.

The women PWDs also decried the level of violence, rape and other forms of sexual harassment they suffer from the public, and called on appropriate authorities to always prosecute violators in accordance with extant laws.

They further called on Ebonyi State government to as a matter of importance, domesticate the Disability Act.

Narrating her ordeal, one of the participants, a disabled Masters Degree Student, Nelly Bisong Ifeanyi, said she missed most of her lectures because they were often held in upper floors of storey classrooms or in elevated floors without ramps.

Ifeanyi said: People neglect us; it is not everybody that accept people with disabilities.

“This has really affected me emotionally and psychologically, such that it has deprived me from certain feats I could have attained.

“It has not been easy from childhood, but I was determined to make it, with the support of my family.

“When I started my Msc programme in Ebonyi State, I always complained to my lecturers about constant up-floor lectures and I will often be ignored.

“But I continued persistently with the Department, threatening to withdraw my school fees before they started addressing my concerns.

“But in my graduate years, I suffered greatly because I hadn’t such boldness then.”

Another participant, Elizabeth Agbo from Abakaliki Local government area, also added: “Government does not make provisions for people with disabilities, and I must say it.

“To start with, the Ministry of Women Affairs is not supposed to be located in an upstair.

“If it must be in an upstair floor, let it have a ramp or working elavator that will lift the disabled.

“Now if we have a complaint, how do we get there?
“I was invited to a programme there one time but I couldn’t go in because I could not be lifted on my wheelchair to the office floor.

“I was deprived the chance of being part of that event.”

They PWDs appreciated WRAHP, and other Civil Society Organizations for increasing their awareness on their rights and self esteem in the society, pledging to step the knowledge down to their peers.

In her address, the Executive Director, Women Rights And Health Project, Mrs Bose Ironsi, explained that the training was part of her Organisation’s efforts to ensure that persons living with disabilities, especially women and girls are advocating for their rights to be free from violence, right violations, and demand a more inclusive justice system that cater for their unique needs.

“And this risk is further exercerbated by a lack of information and limited capacity of women living with disabilities to assert their sexual and reproductive rights, and report rights infringement/ violations and demand a more inclusive justice system that caters to their unique needs.” Udensi emphasized.

In an interview, the Ebonyi State Coordinator, Gender-based violence Taskforce, Barr. Faithvin Nwanchor said the Taskforce has done a lot in sensitizing the disabled and other vulnerable groups on their rights and helping hem seek redress in cases of abuse.

While blaming the inability of the disabled to seek justice partly to ignorance, she expressed excitement over the training, appreciating WRAHP for the intiative.

WRAHP is a registered, not-for-profit organization with the core mission of promoting women and community health by equipping, mobilizing, and actively engaging members of the community as agents of change through information sharing, capacity building and advocacy.

AWWDI, Others Call For End To All Forms Of Violence Against Women With Disabilities

Tallen calls for better treatment of Women with Disabilities

Documentary on women with disabilities in mining communities unveiled