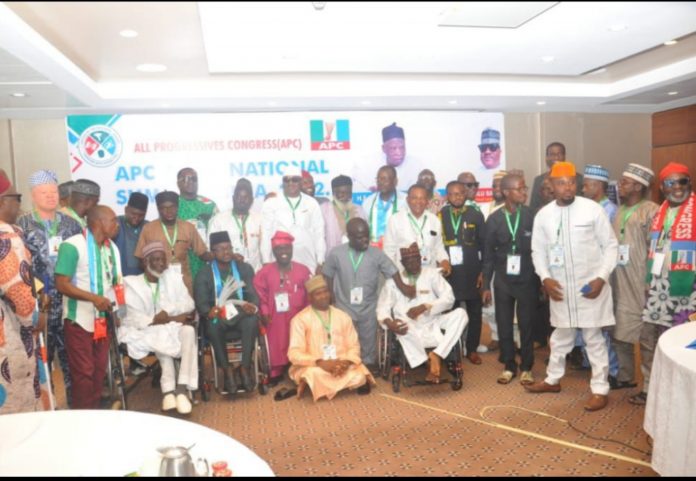 The All Progressives Congress on Thursday unveiled plans to attract over 25 million votes from Persons With Disabilities to secure victory for the party’s presidential flagbearer, Bola Tinubu; other governorship and National Assembly candidates ahead of the 2023 general elections.

This was disclosed in a statement issued by the APC National Leader of Persons With Disabilities, Tolu Bankole, at the inaugural national summit for state and zonal leaders, which was held at the Transcorp Hilton Hotel in Abuja.

Bankole said, “Over 25 million votes from PWDs are waiting to change the 2023 general elections narratives and we have resolved to set up an all-inclusive campaign structure to the polling units level, to work for the victory of Tinubu and Shettima as well as our governors and other candidates of our party.”

The development is coming three weeks after the APC national leader of Persons with Disabilities appealed to the Independent National Electoral Commission to address the plight of visually-impaired voters by providing braille ballots and dedicated polling units for the vulnerable in society.

Bankole made the call at a voter education and sensitisation training held in Osun State for people who were struggling with poor eyesight on the use of braille ballots ahead of the election.

While expressing appreciation to the President, Major General Muhammadu Buhari (retd.), for assenting to the Discrimination Against Persons with Disabilities (Prohibition) Bill on Thursday, Bankole appealed to state governors to domesticated the Act. He also called on the President to appoint a PWD as a minister.

“The summit passionately appealed to the conscience of state governors who have not domesticated the Discrimination Against Persons with Disabilities (Prohibition) Act, 2018 to bequeath an enduring legacy to the PWDs community.

“Equally, we resolved to write to the Independent National Electoral Commission (INEC) to know the correct data of PWDs voters. We ask INEC to extend the continuous voters registration exercise to prevent the disenfranchisement of eligible PWDs voters.

“On insecurity in Nigeria, we reject the drums of dooms and wars by merchants of instability. Nigeria’s security is the collective responsibility of all Nigerians. Enough is enough, this beat of war must stop, we in the PWDs community will not dance to it.

“This summit also charged all PWDs leaders to carry along women and children as a matter of priority. To achieve this, we shall create a directorate for women/children with disabilities to give them a sense of belonging.”

Group Urges organizations to be disability-sensitive in their recruitment