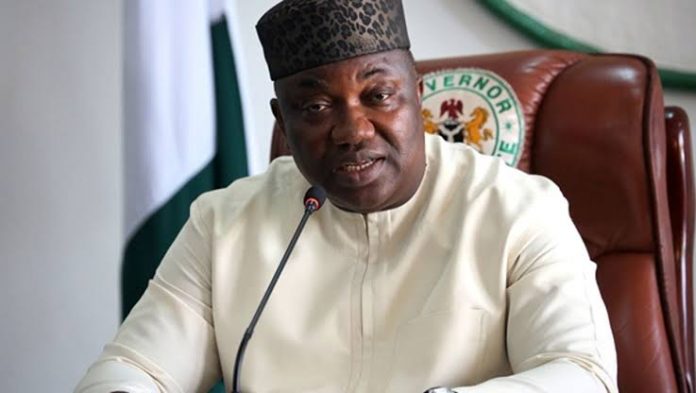 A visually-impaired man, Mr Anibueze Nnadi, whose building was demolished in September 2021, has again appealed to Gov. Ifeanyi Ugwuanyi of Enugu State to come to his aid.

The News Agency of Nigeria learnt that Okwor was laying claim to the land, where the two-bedroom apartment was being constructed for Nnadi by a philanthropist, Mr Okechukwu.

The building was nearing completion, when it was viciously pulled down by hired thugs.

The State Government immediately waded in and announced the suspension of the traditional ruler.

The government’s action came on the heels of fierce protests by angry youths of the communty against the demolition.

When NAN correspondent visited Nnadi on Monday in Aku Village, he was seen squatting in a portion of the demolished structure.

Speaking in an interview with NAN, the 65-year-old said: “I will continue to appeal to the governor to come to my rescue.

“I have no alternative so I have continued to be here but it pains more anytime it rained.

“Nnadi further expressed dismay that “somebody could contemplate hiring thugs to destroy a house being constructed for me by a philanthropist.

“I am thanking the governor for his quick intervention.

“But I am still begging him to get me an accommodation to alleviate my sufferings, especially this rainy season.

“I am always upset whenever it threatens to rain because I have no better place to run to for shelter.

“I will continue to cry for help from the governor and other well-meaning citizens of Enugu State.

“I want the world to know that I was rendered homeless by my fellow man, simply because I am blind.

“I have firm belief that the governor will come to my aid because he is a good man.

“I am also looking onto God for justice and with God, nobody will take away my ancestral land from me,” Nnadi said.

Commissioner Donates 250k To Association Of The Blind In Adamawa, Gets...

Blindness From Diseased Cornea Is Reversible But Nigerians Need To Embrace...