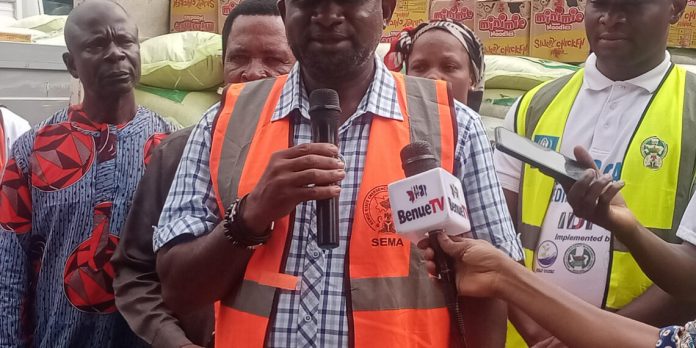 Benue State Emergency Management Agency (SEMA) has blamed the federal government for the deplorable condition of internally displaced persons (IDPs) in the state.

Executive Secretary of SEMA, Dr Emmanuel Shior stated this in a chat with newsmen while flagging off the monthly distribution of relief materials to IDP camps across the state including Abagena, Daudi 1 and 3, Anyii and Agasha among others.

He queried why Benue would be listed among the 19 northern states, yet have nothing to show for it, saying, “at my personal level, as an informed person, and also as a university teacher, I want to challenge that classification because if you say that Benue State is part of the 19 northern states, and the federal government is not demonstrating that in terms of supporting the state government to look after the IDPs, what does that mean?”

Positing further, Shior said, “We are only identified in terms of that classification, and that, for me, is a high level of injustice. That for me, is unacceptable.”

“I use this opportunity to challenge the media to escalate the challenges of IDPs in Benue State and also emphasize the fact that the federal government has neglected the IDPs in the state.

“When we talk about the total population of IDPs, it is difficult to give at the moment, given the continuous coming of the IDPs as a result of the continuous attacks. But we said that the population is about two million.

“The implication of that you have about two million voters. So, even if the IDPs don’t have anything to do, they are also warming up and saying that well, we are entering into another season of general elections.”

The Executive Secretary listed the food items to be distributed to the IDPs for the month of June, to include five trucks of rice, 4,000 cartons of noodles, maize, guinea corn and millet.

He commended the state Governor, Samuel Ortom for always taking seriously, the plight of the Benue people who have continued to stay in IDP camps and cannot return home as a result of continued herdsmen attacks on their communities.

He also hinted that the state government is already making adequate arrangements to ensure that the about 2 million IDPs return back to their ancestral homes soon and continue with their normal lives.