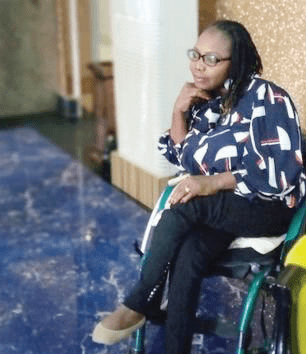 “The Federal Government is doing their bit trying to ameliorate these gaps; recently the present administration signed the National Disability Act into law which has also made provision for the National Commission for Persons with Disabilities saddled with the responsibility of advancement of issues of People with Disabilities. Having said that; People with Disabilities still experience huge discrimination and a lot more needs to be done,” she said. She explains how the disability bill which was signed into law tends to address the issue of discrimination among PWDs.

“Having a law is a right step in the right direction, but we need to be more proactive in the implementation of the National Disability Law to ensure compliance to bridge the gabs in discrimination and marginalisation often experienced by People with Disabilities in all spheres of the society,” she added.

Ogolo noted that her background greatly influenced who she is now.

“Yes, I come from a humble background and my family contributed immensely to what I am today and it gives me joy that I have not only been able to build myself but other people like myself in the disability community. “Growing up was great because of the show of love from my family, on the other hand; I and my family experienced negative societal and attitudinal discrimination in the form of stereotypes, exclusion as a result of ignorance, negative mindsets and perceptions mostly working against the disability community,” she said.

She advised that People with Disabilities should seek for inclusion in service delivery because there is mostly no access for them in the various spaces. “For the deaf it is really so sad that communication barrier exists, you can hardly find a sign language interpreter(s) in many public and private sectors to ease the communication and proffers inclusion for the deaf. Until we begin to prioritize issues of People with Disabilities in government systems and processes, then can we have a more inclusive society that leaves no one behind,” she said.

She emphasized that PWDs face a whole lot of discrimination “People with disabilities have faced a lot of discriminations in their life time and this have affected more or less the way we behave and that has affected our lives as well. It is not easy with PWDs in all spheres of life. As a person that has been fronting the issues of women with disabilities, it has not been easy carrying my community along but it is a passion that we have to ensure that we are not disappearing in the space. Advocacy for Women with Disabilities which is the organisation that was founded to advance issues of women and girls with disabilities.

“We try the much we can to advance issues that affects women and girls with disabilities and this has been on for the past 14 years. One of the challenges that we have come across in our work is charity based, many persons with disabilities still see themselves to have everything they want free of charges. Many of them still believe that everything is based on charity so it is difficult to actually work with people that have that kind of mindset especially when you are running an organisation that is none profit.

“The inspiration around advocacy for women with disabilities is based on the fact that I, the founder is in a wheel chair and having to experience some of the challenges in my life time. God created an opportunity for me to work in a disability funding agency accorded me the opportunity to gather most of my friends and colleague in same circle together and that was how advocacy for women with disability was birthed and it’s just an experience of women and girls with disability put together so that the younger ones coming after us will have space that will be a bit ready and okay for them thrive. From growing up for me it has always been a passion for me to drive this kind of organisation so that we can table our voice so that issues of women with disability which are specific doesn’t disappear from the table of discussion so, we are so happy to have come this far,” she concluded.

Documentary on women with disabilities in mining communities unveiled