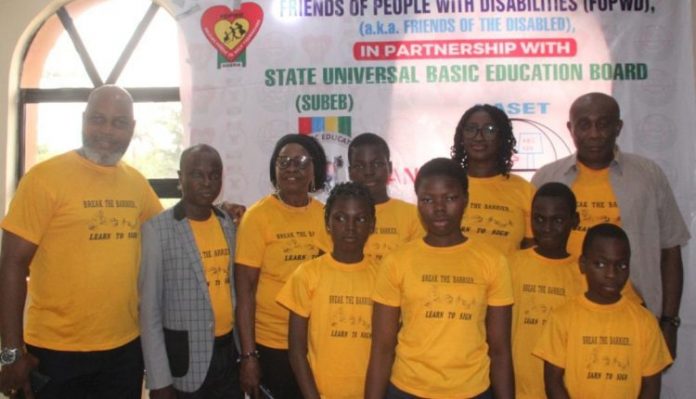 Executive Director, Friends of People with Disabilities (FOPWD), Chief Aku Christy Orduh, has stressed the need for inclusive education for people with hearing and speech impairment in society.

This is even as she urged the Lagos State government to include sign language in the school syllabus.

Speaking at the official launch of Sign Language Club in Lagos, themed, ‘Change Making a Ceremony To Celebrate Barrier Breakers and Emphatic Chil­dren’, Orduh noted that Lagos State has made some viable and valuable steps to show that sign language is necessary in workplaces in order to respond to the needs of people.

She said, “Today, we have produced young energetic children who have decided to carry this good news to others not only as a team but also as individuals.

“And for them to deliver well they need both moral and financial support, they need guidance and encouragement. Like any other club, they need sponsorship. We have heard of “Sponsor a School, Sponsor a Road, Sponsor a Child” etc., and today we add, “Sponsor a sign Language Club”

“We call on companies that produce what children need most, Cadbury, Indomie, Coca-Cola, Lacasera, 7UP, and those that deal in writing materials. Individuals are most needed to extend hands of friendship and solidarity with the club.

“As a club, they will be legal and operate with rules and regulations. We look forward to partnering with those companies and any individual that wants to identify with conquering one disability through learning the language,” she said.

According to her, Lagos State has made some viable and valuable steps to show that sign language is necessary for workplaces to respond to the needs of people.

She noted that FOPWD pilot project in Ereko Methodist Primary School and some Private schools in Shomolu were very successful, adding that children were highly excited.

“Today, knowledge of sign language is an advantage to getting a job in some establishments just as having skills in computer knowledge was some years ago when the computer was not common to many,” she said.

The event, which was launched by FOPWD in collaboration with the Lagos State Universal Education Board (SUBEB) and the National Association of Special Education Teachers (NASET)

Dignitaries at the event include representatives of Lagos State Ministry of Education, Adeyemi Adeboye and Dr. Olufunke Adetola; a representative of Wahab Alawi­ye-King, Executive Chairman, SUBEB; Folashade Adefisoye, who represented the Commis­sioner of Education in the state.