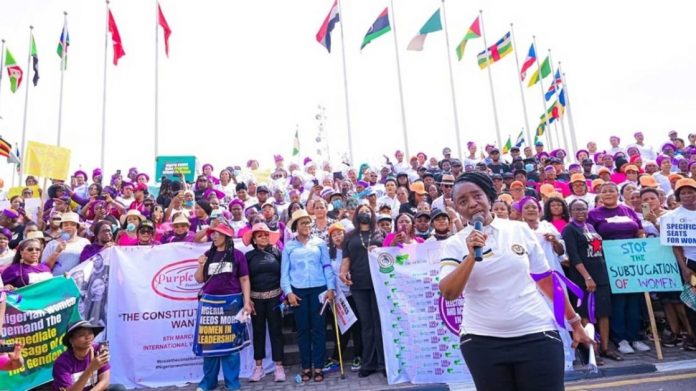 The National President FIDA, Mrs Amina Agbaje, said this at a strategic roundtable for civil societies which held in Abuja.

The News Agency of Nigeria (NAN) reports that the bill, which was rejected by the National Assembly, is aimed at ensuring more women and youth participation in the 2023 general elections.

“The recent rejection of five gender responsive bills that sought to alter the Constitution by the National Assembly has once again brought these issues to the fore.

“There is need to consistently challenge the oppression that our patriarchal society imposes on women, as well as the urgent need to revamp and purge our democratic system of obscure bias.

“We recognise the pivotal role of women’s rights organisations and civil society organizations in the clamour for the passage of these bills and the promotion of women and youth participation in politics,” she said.

Agbaje said the aim of the dialogue was to create a standing observatory network of civil society organisations that would lead the discussions on the re-introduction of gender responsive bills before the national assembly.

“From our perspective, women’s rights organisations and civil society are uniquely placed to reintroduce the gender responsive bills before the National Assembly.

“It is our expectation that at the end of this dialogue, we will have an established action plan that would drive the re-introduction of the gender responsive bills earlier rejected by the national assembly

“Our expectation also is to come up with new innovations aimed at promoting women and youth participation in key political processes in Nigeria,” she said.

The Legal Officer of FIDA, Rahila Dauda said a major task in accomplishing gender balance and more women in politics was in challenging patriarchy exacerbated in the culture of male supremacy.

“The patriarchal cultural norm remains obscured and protected within traditional institutional structures held in abeyance and almost in sacredness.

“To make a meaningful change in gender role relations, in the pursuit of gender equality culture and principles, men and women must share mutual respect while there must be a reconstruction of gender power play.

“A mandate for women’s participation cuts across sectors and institutions, a major challenge from this is how best to ensure that these roles are effective, not only within government but also within the private sector and civil society,” she said.

Dauda said the affirmative action was part of the National Gender Policy of 2006 that was set up by the Federal Government, but has not been implemented, adding that it was only applicable to the Federal positions.

“This affirmative action if fully implemented will see that there will be at least 15 women out of the 44 ministers.

“Leveraging on this heroic judgment and its significant role it portrays to the struggle for women participation in politics and its application,” she said.
Dauda said Nigeria was blessed with competent and intelligent women who are doing very well in the private sectors, government and even outside the country.

She said more advocacy and lobbying must be done to ensure that the Federal Government implements this judgment, which is part of the National Gender Policy that the same Federal government initiated.

“Women are the best managers, Persons With Disabilities (PWDs) have the abilities in them, we have the talents and potential to be leaders.
“We should begin to see what potentials in those leaders rather than what they have to offer,” she said.

A Gender Activist, Mrs Ene Edeh, advised women not to be discouraged, rather look for ways to ensure better participation.