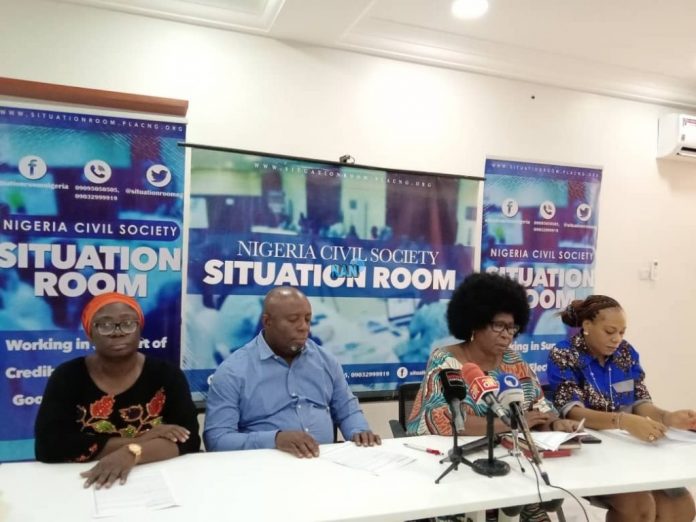 Convener, Nigeria Civil Society Situation Room, Ene Obi said this at a news conference on the state of the nation and election outlook ahead of the 2023 General Elections in Abuja on Thursday.

According to Obi, Situation Room is raising concern about some actions leading to the elections as the tensions can cause aggrieved parties to act against the best interest of the country if these issues are not immediately resolved.

She said that the high cost of nomination forms was a means of discrimination against marginalised groups.

“The high cost of Expression of Interest and Nomination Forms of the ruling All Progressives Congress (APC) and Peoples Democratic Party (PDP), especially for Presidential and Governorship seats have been a subject of controversy that have stirred public outcry.

“Although, both parties have given some form of waivers to women, Persons with Disabilities (PWDs) and Youth, Situation Room notes that the cost of these forms are still exorbitant considering the economic realities in Nigeria and the financial state of most Nigerians.’’

“Situation Room further notes that these high costs will ironically affirm the exclusion of women, PWDs and youth who are already marginalised in the country’s electoral clime.

“This is because they may not have the financial capacity to contest for an elective position.
“ Indeed, this further widens the inequality gap which is quite discriminatory as we have seen people from humble backgrounds attain leadership positions in Nigeria.’’

Obi said that this puts the marginalised groups at a great disadvantage and does not open up the space for new players as necessary in a democracy. She said that another key concern for Situation Room bordered on Section 84 (12) of the new Electoral Act 2022 which is on political appointees’ ineligibility to be a voting delegate or aspirant.

She said the section stipulates thus: “No political appointee at any level shall be a voting delegate or be voted for at the Convention or Congress of any political party for the purpose
of the nomination of candidates for an election”.

She said that Situation Room recalled the efforts of the president to expunge this clause, a move that was rejected by the National Assembly.

Obi said that although the president called for the resignation of his cabinet members vying for an elective position, it was not clear if this applied to other appointments that were not ministerial.

She said that Nigerians were deeply concerned by the controversy surrounding the presidential ambition of the Governor of Central Bank of Nigeria (CBN), Mr Godwin Emefiele.

According to Obi, his action is a direct contravention of Section 9 of the CBN Act 2007 which states that the apex bank governor should not venture into any other vocation while in office.

“Of utmost concern is the role the CBN plays in safeguarding and delivering election materials as part of INECs efforts to guarantee the safety of materials.

“The whole aim of relying on the neutrality of the CBN to carry out this task has been defeated if the person at the helm is a member of a political party.

“ It is equally in bad taste that he approached the court to declare him eligible to run for president.’’
Obi said that going by this development, Situation Room therefore, call for the resignation of the CBN Governor and others vying for positions but still holding ministerial and political appointments to resign without further delay.

She said that it was disappointing that there were clear lapses in the areas of security, economy, transportation and education in Nigeria, especially in the train attack where passengers abducted were yet to gain freedom.

Obi said that the Academic Staff Union of Universities’ (ASUU) strike had lasted for more than three months and the Naira’s continuous plummeting against the dollar was another challenge.

She said that in spite of this, political appointees in these sectors appeared focused on their future political ambitions, thereby, neglecting their key responsibilities.

The convener said that scorecards revealed that they had not performed maximally, a great disservice to Nigeria.
She said that these issues raised questions, yet nomination forms were being purchased while the nation and Nigerians suffered.

Obi said that it was pertinent to state that these actions could have a direct negative effect on the 2023 general elections and result in low voter turnout.

This ,she said was because young people and others making up the marginalised groups, did not have a chance at nominations and their state of mind due to the present situation of things in the country had been befouled.

She said that this could also create a tensed political atmosphere created by disgruntled groups who are underrepresented.

The convener said that Situation Room therefore, urged the Federal Government to address these concerns and create a democratic environment to ensure a free, fair credible and inclusive 2023 general elections.
She said the group also hoped that the government would enforce the May 16, deadline given to ministers vying for elective office to resign.

Obi said that violations to the 1999 Constitution and the Electoral Act 2022 were already ongoing as the ministers ought to have resigned 30 days before the electoral process commences according to the constitution.

She said that Situation Room urged Nigerians not to be weary and perform their civic duty to vote, while urging them to register and obtain a Permanent Voter’s Card (PVC). (NAN)