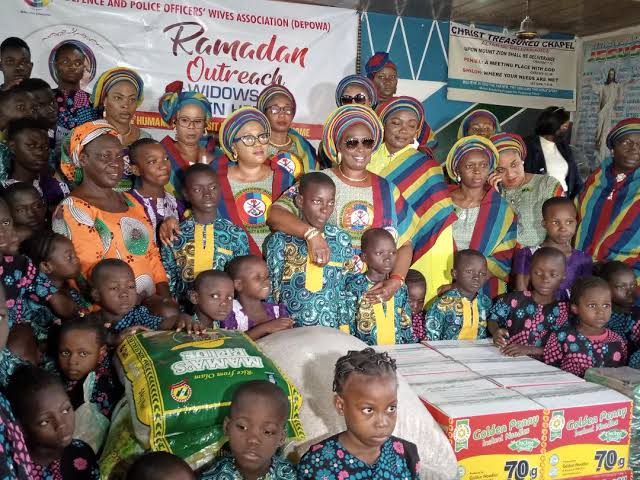 The President, Defence and Police Officers’ Wives Association (DEPOWA), Mrs Vickie Irabor, on Friday, distributed food items and cash to widows of fallen heroes and an orphanage home in the spirit of Ramadan.

While the widows received the items at DEPOWA secretariat, Mrs Irabor led her team to Christ Treasure Orphanage Home in Kwali, Abuja.

Items distributed include bags of rice, beans, garri, cartons of noodles, packs of spaghetti, tubers of yams, bags of millets, beverages and toiletries as well as cash.

The DEPOWA president and wife of the Chief of Defence Staff said the Ramadan outreach and humanitarian gesture was aimed at complementing the non-kinetic operations of the Armed Forces of Nigeria (AFN).

She said the women were dear to her heart, assuring them that military and the Nation would always cherish the memories of their late husbands who paid the supreme price in defence of Nigeria.

Irabor commended the widows for their resilience in keeping the home front in the absence of their husbands and urged them to remain strong in the task of bringing up their children.

She pledged the continuous support of DEPOWA and the armed forces.

She urged the children to remain worthy ambassadors as their future would be greater.

Responding on behalf of the home, Mrs Queen Abraham thanked DEPOWA President for the benevolence in meeting the immediate needs of the orphanage.

Abraham promised that the items would be judiciously used amd prayed for the DEPOWA President and other members of the association for identifying with the orphanage home. (NAN)

PWDs, widows, others to benefit from COVID-19 support scheme