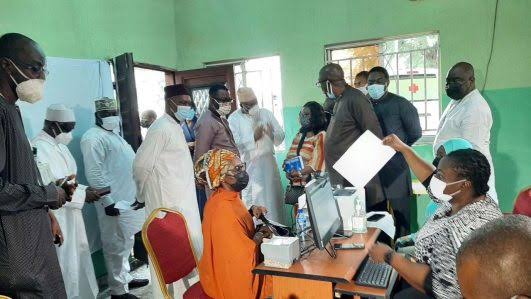 The European Centre for Electoral Support (ECES) has stressed the need to uphold the electoral rights of Persons With Disabilities (PWDs), noting that their right to vote and be voted for remains one of the most visible gains in any thriving democracy.

It noted that since the constitution does not alienate them from voting and contesting, it, therefore, becomes critical to put in place measures that would minimise or eliminate discriminatory practices.

The Project Coordinator of ECES, Hamza Fassi-Fihri, stated this at the Bridge Modular Training on access and participation of PWDS in the electoral process for Independent National Electoral Commission (INEC) disability desk officers.

He said promotion of rights and freedoms of PWDs in election matters is captured in both local and international declarations, protocols and instruments as endorsed by the United Nations (UN), African Union (AU) and the Economic Community of West African States (ECOWAS), among others.

National Commissioner and Chairman, Outreach And Partnership Committee (OPC), INEC, Prof. Kunle, noted that the non-negotiable minimum of a credible and democratic electioneering process is its inclusivity and ability of stakeholders to access and participate in the electoral space on basis of equality.

He stated that the commission has as one of its core values the creation of a level-playing field for all stakeholders to participate in, especially the marginalised groups, including the PWDs.

On his part, Lagos State Resident Electoral Commissioner (REC), Olusegun Agbaje, stated that bringing the Disabilities Desk Officers (DDOs) together to attend the training was a bold attempt by the electoral umpire at strengthening the capacity of these officers in the discharge of their special official functions.

“As DDOs, you are expected to translate the skills that you will garner from this event into greater participation of the PWDs in the electoral process,” he said.

At Least 16 Dead As Lightning Strikes Church In Rwanda