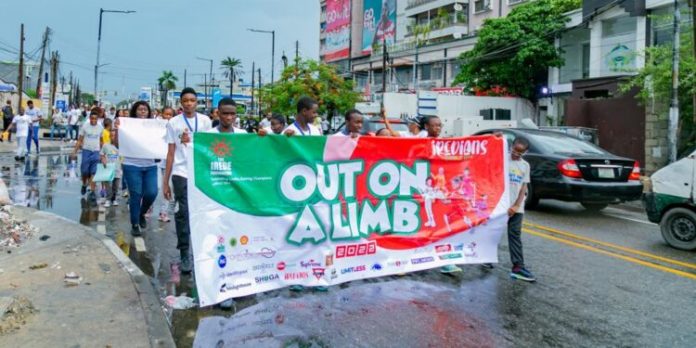 Over the weekend, Irede Foundation took the street of strategic locations in Lagos to raise awareness on behalf of Persons without limbs and other persons living with different physical disabilities and the need to raise funds for them as well as other forms of help they deserve from rest of us in the society.

This movement was in commemoration of Limb Loss Awareness Month celebrated around the world in the month of April to recognise those living with limb loss and limb difference. The Irede Foundation called on the public to end discrimination and societal stigmatisation against children that have been amputated, adult amputees and in general persons living with disabilities (PLWD).

At the “Out On A Limb” campaign, the foundation implored altruistic and humane individuals to help meet it’s target of providing child amputees with 100 limbs, which would cost about N1.5 million approximately for a limb.

Executive Director/founder of the Irede Foundation, Crystal Chigbu, made the appeal as the amputees set out to celebrate their uniqueness, strength and their ability to thrive against all odds.

“We’ve had “Out On A Limb” (OOAL) consistently for nine years, though the foundation is celebrating its 10th year. It is our awareness and advocacy project where we raise awareness on disability with focus on limb loss. April is designated for these fellows to make them have sense of belonging, because they are human being like every other person.

“Also to sensitise the public and ask that “We say no to discrimination and societal stigmatisation” that affects children that have been amputated and also amputees in general.

Chigbu stressed that the awareness programme was held in 50 other locations globally, saying, “We are doing this to appeal to the public to fundraise to be able to give more limbs to children that have been amputated,”

“We are fundraising to give 100 limbs to children this year. Our estimate for a limb is between N1.2 to N1.5 million for one limb, so we are asking for the support of the public. We are also asking that the community will support children that have been amputated.

The humaniterian condenmed at the rate at which these fellows were treated in public schools. “We understand that some schools reject these children because they have just one leg. We must state it here clear that, discrimination against our fellow human beings should not be heard of or seen, it should not happen at all. There should be full acceptance of every child into school, people must know that there is nothing wrong with these children and they should be able to get access to education and other social services like every other children,”

She affirmed that with the theme of this year’s walk, “IREDIANS,” the advocacy walk aimed to spotlight and promote the first-ever disability comic book in Africa, “Iredians” which was launched in November 2021, to highlight the active participation of children with disabilities who are fighting against peer discrimination.

Senior Special Adviser to Lagos State Governor, on persons with disabilities, Adenike Oyetunde Lawal, asked PLWD to maximise opportunities provided by the state government, saying that the state government was willing and ready to ameliorate the plights of PLWD in the state.

“I usually say that are opportunities available from office of people with disabilities, thus we need to explore those opportunities and leverage on the relationship with the office of disabilities affairs, the governor has the plights of these fellow human being at heart, he does not downplay them, he is concerned about them and would do everything necessary to give them a meaningful life,” she assured.

The Director of Programs, Ms. Wuraola Kayode added, “While we have not converged en masse in the past two years, we have continued to fulfill our mission of inspiring action so children living with limb loss and their families can live independent and limitless lives.

The director confirmed that the Foundation launched an inclusive magazine for children which highlights disabilities in children, promotes inclusion, and discourages discrimination and bullying. “We have given over 250 number of limbs to children across Nigeria, and we also launched the Inclusive Education Project which ensures children living with disabilities are able to thrive whilst bringing their whole selves to the academic world,”

Kayode added that since inception of the initiative, Irede had led conversations across 40 locations globally with a direct reach of 15,000 people and an indirect reach of 10,000,000 people globally, which had enabled the foundation the opportunity to raise awareness about Limb loss & Limb Difference, increase top of mind awareness about the work the foundation does and the support available for target stakeholders, and raise funds to continue to empower child amputees.

“More than ever, all children need to be more aware of their environment, in which disability is a huge part, and while we have done so much in this regard, the work ahead of us is much greater and we need all the support we can get. To this end we are calling for individuals, corporate and government bodies to join us whilst also committing to support and sustain the work we do,” she implored.