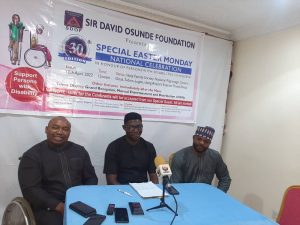 A Non-Governmental Organisation (NGO), Sir David Osunde Foundation, says it has empowered more than 20,000 poor people since it was established 30 years ago.

The Founder of the organisation, Sir David Osunde, on Friday in Abuja, said that more people with disabilities would be supported during the organisation’s 30th anniversary on April 18.

Osunde, who was represented by Martin Umeatuegbu, Operations Manager of the Foundation, said that the 20,000 beneficiaries received educational grants, mobility aids, entrepreneurship and skills training and medical care.

According to him, majority of the beneficiaries now live independently, contributing their quota to national development.

He said the foundation was established to create awareness on the need to collectively take care of persons with disabilities and encourage them to be educated.

Osunde said it was through education that they would be able to know and defend their rights.

The foundation would also honour President Muhammadu Buhari and Dame Pauline Tallen, Minister of Women Affairs, for their immense support to people with disabilities in Nigeria. (NAN)

Disability Community Must Be Given Better Recognition In Hollywood  -Columnists

NASS To Transmit Disability Bill Within 30 Days For Buhari’s Assent...