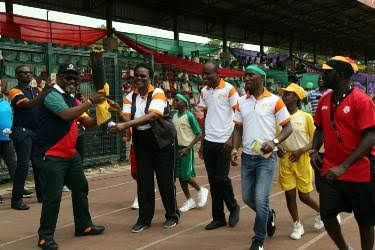 The Federal Capital Territory Administration (FCTA) on Thursday identified the sports competition between high schools as a true platform for the search for Olympic talents in the country.

Attah said that the FCT Minister, Malam Muhammad Bello, and the Minister of State, Dr. Ramatu Aliyu, believed in the combination of sport and education as a viable tool to ensure that students develop properly.

According to him, this will allow students to escape the intertwined vices of drug abuse and cultism.

“Because of places like, this great talent was discovered that will replace the NUGA Olympics in college and other very vital national games,” Attah said.

He expressed his optimism that the inter-house competition would take the opportunity for the school administration and government to fish for talent that would not only make the FCT proud but the nation.

Attaj said that he had been ordered by the FCT minister to make an impassioned appeal to students across the territory to avoid the vices of worship and drug addiction.

“Because your future is still bright and it won’t blink if you decide to follow the right path.

“So please do everything you can not to get involved in sects, gangsters and do not fraternize with men who do not represent the moral standard of their parents, faith and vocation,” he said.

Previously, the school principal, Mrs. Olure Irewole, said that sports promote discipline and academic brilliance, as well as provide the opportunity for students to get closer to each other to form bonds and friendship.

He appealed to the FCT administration to provide a large room for indoor games that were recently introduced to students, such as Scrabble, Chest, Ludo and Ayo.

He also called on the administration to support the school with sports equipment such as jerseys, balls, nets, and upgrade the school’s sports field to a standard one.

Furthermore, Ms. re Emeje, Acting Chairperson of the FCT Secondary Education Board, revealed that three FCT students discovered through inter-house sports were already participating in international athletics outside the country.

“They were selected from two of our schools in Jiwa and Deidei.”

She, however, urged students to take their academic pursuits seriously.

Nigeria’s Ejike, five other athletes to watch at Tokyo Paralympics