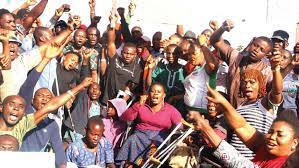 Over time, people living with disabilities have continued to make advocacies for inclusion in many areas of life, especially being seen as people that can stand on their own and contribute their quota to the development of society.  And while there has been improvements in the way people perceive and treat them in the face of ongoing awareness that there is ability in disability, they have continued to ask for more.

Last week, they made a case to the Oyo State Government, asking for inclusion of people living with disabilities in party politics in Oyo State, explaining that they also have a constituency and are in the best position to understand the needs of people like them.

The advocacy was led by an activist, Bamikunle Rasaq Tunde, popularly called Baba 70, who though living with disability, has been fighting the cause of young farmers within the Oke-Ogun axis of the state and doing his best to call for their protection from herdsmen who continually invade their farms.

Bamikunle, the Chief Executive Officer of Baba 70 foundation had exposed himself to threats from herders in his bid to protect his community of farmers from invasion and he remains undeterred in pursuing his vision of a better life for farmers, the downtrodden, and people living with a disability.

And to pursue his vision of political inclusion, he took his advocacy to the Oyo State Government through the office of the Special Assistant to the Governor on People with Special Needs, Timothy Olufemi Sunday, where he called for affirmative action for the “physically challenged persons in party politics in Oyo State during a courtesy visit.

He further expressed appreciation for the appointment of physically challenged persons into teaching positions by TESCOM, emphasising that the government has shown love for them. He however appealed that they should further be included in party politics.

“This advocacy is to appeal to His Excellency as the leader of our great party, the People Democratic Party (PDP), to use his exalted position to push for inclusion and to give an opportunity to physically challenged persons to be standard-bearers of our great party during elections. What is good for the goose, they say, is also good for the gander. The way women are given the concession to contest on the platform of the party with free nomination forms or at a highly discounted rate, we also appeal that similar opportunities be extended to physically challenged persons.

“Physical disability is not a mental disability. Many physically challenged persons who had been privileged to be tested in one position or the other have given a good account of themselves among these are Barrister Adekanbi; the Special Adviser to the Governor, Late Prince Paul Adelabu; former Special Adviser to Late Governor Ajimobi. It is my humble appeal that the inclusion of people with special needs in governance should not be limited to political appointments. Rather, people with physical disabilities too should be allowed to be party candidates to be voted for,” he appealed.

Baba 70 emphasised that he had privately contributed to human capital development in his local government in the area of agitation for the right of peasant farmers, especially in times of willful damage of their crops by cattle herders, economic empowerment through agriculture at Okaka by BABA70 foundation, intervention and protection of farmers at Olemo village in Ikere Dam Area during a violent clash with cattle herders and support to the school for the handicapped in Iseyin among others.

The activist, who had representatives of Iseyin youths in his entourage said they followed him because they believe in him and want him to represent them in politics, adding that the Accurate Youths Forum had requested he should join party politics to seek the mandate to represent Oke-Ogun/Ogbomoso Federal Constituency at the Senate of the Federal Republic of Nigeria in 2023.

A letter of confirmation by the Accurate Youths Forum read in part: “We wish to formally recognise and acknowledge your numerous positive contributions to the development of our society through your philanthropic gestures which include your laudable efforts towards the uplifting of the living standard of the poor and physically challenged persons and many other laudable efforts.

“All these and many more informed our decision to call on you to join party politics and seek a political mandate to serve at a larger pedestal. This is because we cherish your passion for humanity and progressive-mindedness and we believe if you have greater opportunities you will make a better political representative. Your prompt response to our clarion call will be appreciated,” the letter said.

CCD Calls For Political Participation And Access To Justice For PWDs