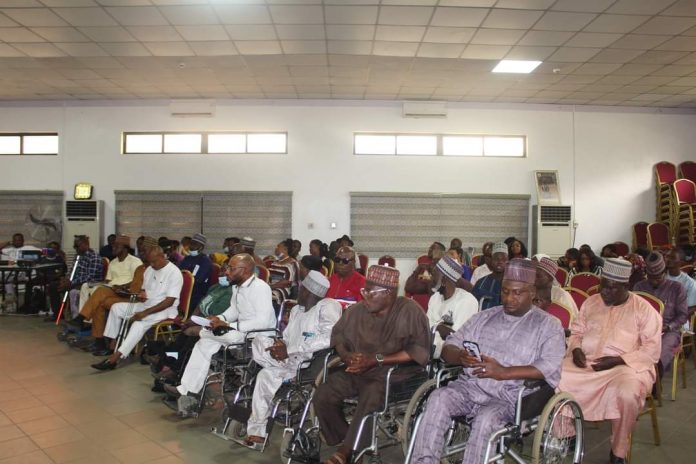 The stakeholders spoke in Abuja on Friday at the end of the third annual anniversary of the Act.

Mr David Anyaele, Executive Director, Center for Citizens with Disabilities (CCD) said that the commission promised to operate in an open and transparent manner, by being inclusive, fair and just to all people.

“It is unfortunate that the executive secretary of the commission failed to attend the programme without cogent reasons.

“The NCPWDs executive secretary committed during the second anniversary to sponsor subsequent anniversary of the disability rights act and use the platform to render account of his stewardship to Nigerians.

“He promised to run an open and transparent commission that will be inclusive, fair and just to everyone.

“However, it is unfortunate that he is not around to give an open account of the activities carried out by the commission in enhancing the lives of approximately 31million PWDs,” Anyaele said.

He promised that the CCD would redouble its efforts in creating awareness and holding programmes that would promote effective implementation of act.

“I commend CCD for its relentless efforts in gathering the various disability clusters and relevant stakeholders to share experience on disability related matters.

“NOA will continue to promote issues of PWDs by mobilising, creating awareness and sensitising Nigerians on the disability act and other related matters,” Abari said.

Mr Daniel Onwe, President, Association of Lawyers with Disabilities in Nigeria (ALDIN) called for more partnerships to raise awareness on the disability act.

Onwe said that stakeholders should collaborate to produce simplified version of the act for the benefit of average citizens.

Mr Husseini Abdul, Country Director, Care International, said that the Nigerian constitution should be amended to give proper recognition to PWDs in the country.

According to Abdul, Section 42 of the Nigerian constitution provides for the rights to freedom of discrimination based on ethnicity, origin, sex, religion and political freedom.

“However, it expressly failed to make reference to PWDs which is a problem that the country’s constitution does not recognise the most marginalised group,” the country director said.

He added that the entire disability community should hold the commission, NOA and other line government Ministries, Departments and Agencies (MDAs) responsible for awareness creation on the Act to perform its duties.