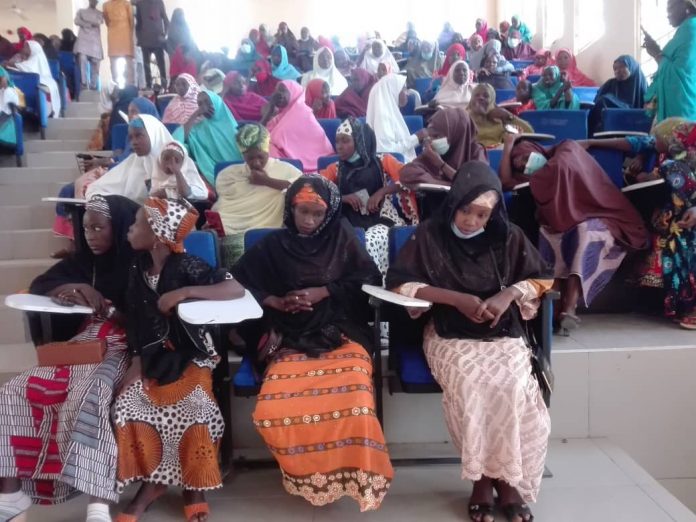 All of the trainees had undergone various training and acquired skills in different areas of enterprise. The training, according to the president of the foundation, Hon Adamu Abba Hassan was aimed at equipping the young women with meaningful entrepreneurial skills needed for achieving self-reliance in a post- covid 19 era.

In the remarks of the President of the Foundation, “Women, especially the younger generation have suffered a disproportionate amount of poverty endemic and their plights have been made aggravated by the current global economic and social hardships.”

He continued, “I come to realise what our women need badly but unfortunately lack skills that they can use to support themselves and their children. This is why I took it upon myself to train as many women as possible, and I pray to Almighty Allah to help me in this effort”

Speaking at the occasion, the wife of a former governorship aspirant, Dr.Jamilu Ishyaku Gomna, Hajiya Dr. Zainab Jamilu Ishyaku Gomna, who spoke through her representative Hajiya Aishatu Abubakar,  expressed great appreciation to the Hon Adamu Abba Hassan for his uncommon philanthropic gesture towards the people of the state, especially the destitute, women, and orphans.

“Gombe State is blessed to have kind-hearted people like Hon Adamu Abba Hassan whose interest in life is always to put a smile on the faces of the less privileged members of the society”, he gushed.

Inclusive News Network (INN) gathered that the renowned philanthropist has equipped a total of 200 young women selected across different parts of the state with entrepreneurial skills in several fields, including tailoring, shoemaking, bag making, perfume and pomade production, hairdressing, etc. Before graduation, the trainees had spent about three months in training.

Delivering his remarks during the event, the Secretary-General of Gombe State Association of the Deaf (GOMSAD), Yusuf Mohammed Lawan, thanked the President of Masoyi Foundation Hon Adamu Abba Hassan for his concern towards the plights of Persons with Disabilities (PWDs), nothing that by inviting the state Deaf community to grace the occasion. “Hon Adamu Abba Hassan has clearly demonstrated to the world that he is a man who abhors discrimination in its entirety and he, therefore, deserves to be appreciated.

Lawan used the occasion to call on other philanthropists to emulate the good example proven by Hon Adamu Abba Hassan to ensure an inclusive society where everyone is valued without any form of discrimination whatsoever.

“I am using this opportunity to call on other leaders especially our respected members of the high table to emulate the good example set by Hon Adamu Abba Hassan. I call on you to organize empowerment programmes for persons with Disabilities (PWDs) in order to equip them with skills necessary for achieving self-reliance.”

He lamented that there weren’t many people organizing empowerment for their people, adding that the government isn’t doing it. “We have an enormous number of women and youth roaming the streets begging for alms and exposing themselves to various social hazards.”, he completed.

Reacting to the issues raised by Mr. Lawan, the President of Masoyi Foundation Hon Adamu Abba Hassan thanked Mr. Lawan for honouring the invitation to grace the event and said he promised to join hands with other organizations with similar objectives to empower 100 Deaf including both males and females.

The president stated emphatically of his interest to advance the interest of Persons with Disabilities and will do his utmost best to include them in his philanthropic initiatives.