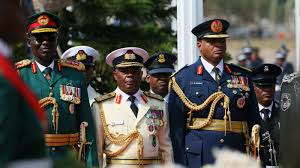 A serving two-star general in the Nigerian Army, Aminu Chinade, has established a foundation for orphans and vulnerable children in his Chinade community in Katagum Local Government Area of Bauchi State.

The News Agency of Nigeria (NAN) reports that Chinade was recently promoted to the position of a major general in the Nigerian Army.

Chinade announced the setting up of the foundation at a reception organised by the Chinade community to celebrate his elevation.

He said the foundation would cater for the health and education of orphans and vulnerable children of the area, devoid of religious, sectional or tribal differences.

He thanked his kinsmen for the honour done to him and pledged to continue to serve his people and the entire country.

Chinade, who donated N2million for the take-off of the foundation, was supported by his friends and well wishers with additional donation of N3.5million.

In his remarks, Amb. Jibrin Chinade, the chairman of the occasion, commended the philanthropic gesture of the general and urged the people to emulate him.

Amb. Chinade, who described the two-star general as a pillar of support for the entire people of the area, urged him to sustain the gesture for the benefit of humanity.

“This kind gesture is capable of bringing speedy growth and development to the area,” he said.

He urged for more unity and understanding among all the sons and daughters of Chinade and called on other prominent indigenes to always do good for humanity. NAN

Naira Stable At N360.1/$ on Investor and Exporter And In Parallel...