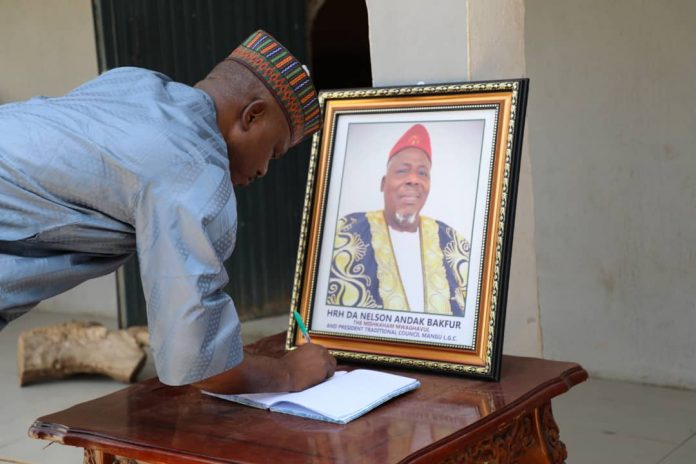 The Executive Secretary, National Commission for Persons With Disabilities, David Lalu extol the exemplary characters of his mentor, Pa Nelson Bakfur.
The NCPWD helmsman, who was in the company of other dignitaries paid a condolence visit to the family of HRH the Mishkaham Mwaghavul of Mangu Local government in Plateau State whose demise occurred recently after a brief illness.
James Lalu who is also a son of the soil described the royal father as an impresario he will forever miss.
According to him, Pa Nelson groomed him to become selfless and focused in any circumstance no matter how difficult it may appear.
“When one is appointed a leader in any capacity, one must first recognize that it is a mandate from God, which must be seen as an opportunity to serve humanity,”  he said.
While commiserating with the spouse of the deceased, the ES urged the matriarch to accept the occurrence as an act of God which can only be greeted with gratitude to Him alone.
The  ES further proceeded to condole with the chairman, Local government of Mangu, Hon. Minister D. Daniel. He seized the occasion to appreciate him over his antecedents and equally advised him to emulate the royal enigma by being selfless to his community.
He equally informed him of the mandatory 5% employment for Persons With Disabilities in all government offices. He then encouraged the LG boss to create job opportunities for Persons With disabilities in the Counsel such as it’s done at other government establishments as this will go a long way to honour the memory of the late Patriarch.
In an elated mood, the Chairman, Local government of Mangu, Hon. Minister Daniel said he was pleased to have such a dependable figure at the Federal level representing not only the Mangu Local government but the entire community of persons with disabilities.
He also expressed confidence in the ES whom the Commander-in-Chief of the Armed Forces, President Muhammadu Buhari has appointed to superintend over 35.5 million people of this great country.
He further reassured the ES of his resolve to contribute his quota towards advancing the course of Persons With disabilities in Mangu local government.
Post Views: 102