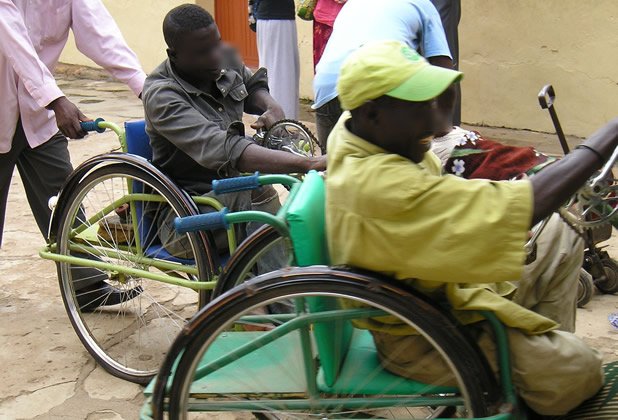 In what can be described as a ‘show of compassion’, a non-governmental organisation, Sly Foundation, has gifted a deaf, dumb and lame man a wheelchair.

The incident which took place in Ughelli, Delta State, recently, witnessed many onlookers singing the praises of the NGO over what they consider as a show of love.

Our correspondent learned that the physically challenged man had had his knees and toes badly bruised owing to having to crawl all the time, just to aid his rather slippery movement.

Speaking on the development, Sylvester Omobor, who is the founder of the NGO, said: “I met the young man on the way while driving along the streets of Ughelli, Delta State. I was so pained about his movement. I had to tell him to stay where I met him and had to go get him a wheel chair immediately.

“He is deaf, dumb and lame. Imagine that! He had been using his knees for walking, for a long time. Whatever we do, we should endeavour to spread love. Love is what we stand for.”