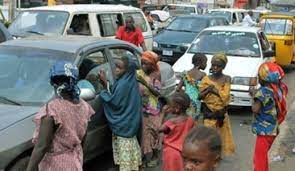 LIKE most cosmopolitan cities, Lagos is also confronted with the menace of street begging and hawking. Begging is an age long activity prominent in urban centres where it is common to see the physically challenged, visually impaired, deaf and even supposedly stranded visitors (famously referred to as corporate beggars) throng walkways, street corners, religious centres, etc., begging for alms.

While some of these beggars are genuinely in need, others simply want to catch on the legendary generosity of Lagosians to eke out a living. The increasing population of beggars and street hawkers in Lagos has become an eyesore as they now constitute environmental hazards as well as security threats. There have been instances when a few of these so-called beggars and hawkers were discovered to be agents of daredevil criminals.

No doubt, the menace of beggars and hawkers in Lagos had reached an alarming dimension. This is in spite of regular rescue operations carried out by the rescue team of the State’s Rehabilitation Department. Beggars and hawkers of different categories have continued to be common sights across the state with resultant negative effects on traffic management and security.

Investigation has shown that both menaces have become big business to some groups of people, as beggars and hawkers (children and adults) are transported regularly from other parts of the country to Lagos with the sole aim of engaging in the detestable and demeaning venture.

To drug addicts such as Mr. Olatubosun, it is a means of gratifying appetite for hard drugs. This is just to mention a few examples of how criminals now take advantage of Lagosians’ magnanimity to swindle them of their hard earned money.

Street begging has, thus, been identified as a means of defrauding as well as a source of insecurity in the state. Compared to highbrow areas like Ikoyi and Victoria Island where residents would rather prefer to alert the police rather than give alms to beggars, people living in densely populated suburbs of the metropolis are typically friendlier to beggars.

In fact, there is a particular street on the Mainland mostly inhabited by visually impaired beggars. It is also not uncommon to notice groups of people in branded T-shirts, soliciting for alms in major bus stops and markets, to treat patients with various health challenges by displaying the latter’s pictures.

While it is not inappropriate to give alms to beggars, their activities have, however, suggested otherwise as people now hide under the pretext of begging to dispossess members of the public of their valuables, either on the road or in their residences.

A report had it that a beggar that was given alms during the day led his group of armed robbers to attack his benefactor at night. Also, some beggars have been discovered to be accomplices to various forms of crimes. In order to tackle the nuisance of street begging and hawking in the state, the Babajide Olusola Sanwo-Olu Administration has indicated its readiness to tackle the menace head-on.

The government has set up a Special Task Force to curb the illicit ventures under which many criminals have hidden to attack motorists and other residents. At a press conference that had the Commissioner for Youth and Social Development, Mr. Olusegun Dawodu, his Information and Strategy counterpart, Mr. Gbenga Omotoso, and Lagos State Commissioner of Police, Mr. Hakeem Odumosu in attendance at Alausa, Dawodu said setting up the task force has become necessary to sanitise the society and restore the dignity of those who have been sent into the streets for alms begging and hawking. The special team has since commenced operations.

According to Dawodu, the plan to stop street begging was based on intelligence reports that some of the “so-called” beggars go about with dangerous weapons, assault and rob innocent Lagosians. Consequently, the government has deployed a lot of human and material resources towards enlightenment and sensitisation via different media platforms.

As they say, enlightenment becomes entertainment without enforcement. That is why the way to go now is to enforce compliance with the laws of the state for sanity to reign in the society.

Rather than offer alms to street beggars, Lagosians have been enjoined to take such gifts to recognised registered homes, orphanages, rehabilitation and faith-based organisations where such donations would be judiciously utilised in ameliorating the conditions of the vulnerable.

Religious, traditional and political leaders at various levels as well as the media are also urged to support the governments for advocacy against hawking and begging. All Lagosians should join forces to discourage the inhuman culture, which has the capacity to adversely affect the well-being of residents.

As part of the measures being put in place to tackle the nuisance, the government has maintained a Rescue Unit saddled with the responsibility of rescuing and protecting the destitute and the vulnerable.

According to Section 157(b) and (e) of the Criminal Law, 2015, nuisance is described as any person who prevents the public from having access to any part of a highway by an excessive and unreasonable use of it or does any unlawful act which causes inconveniences or damage to the public.

Therefore, those involved in the illicit business of street hawking and alms begging are urged to desist in their own interest as appropriate penalties would be applied on anyone caught flouting the law. As much as Lagos is home to various people for diverse reasons, it should not accommodate the nuisance of all.

Street begging is a social vice that the society cannot afford to watch until it attains an uncontrollable level. Otherwise, all the good plans and programmes to transform the state would be adversely affected. The same goes for street hawking. On a final note, emphasis must be placed on the dignity of labour.

In a financial and commercial hub like Lagos, there will always be something legitimate and decent for everyone to engage in to earn a reasonable living. Street begging and hawking are not good for our image as a people. It must be condemned and discouraged by all and sundry.