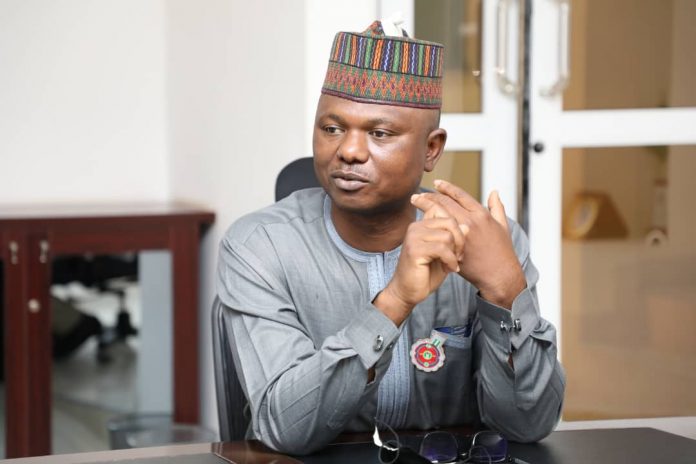 The National Commission of People With Disabilities (NCPWD) is set to start comprehensive certification of all Persons with Disabilities in Nigeria.
In a release made available to the public by the Commission’s Media Team, the note read “During a courtesy visit by the Permanent Secretary, Federal Ministry of Humanitarian Affairs, Disaster Management, and Social Development Mr. Bashir Nura Alkali to the National Commission for Persons With Disabilities today 12th December 2022 in Abuja, the Executive Secretary National Commission for Persons With Disabilities, Mr. James David Lalu declared that Persons with Disabilities will commence full registration for biodata capturing in the Commission.
This exercise he said, would enable easy identification of PWDs with proper certification that will integrate them into the Federal  Government’s programmes  in 2022 and beyond.
The ES further hinted that certificates and Identity Cards will be issued to Persons with Disabilities after the exercise.
He appreciated the Honourable Minister of Humanitarian Affairs Hajia Sadiya Umar Farouq and the Permanent Secretary Bashir Nura Alkali for their unwavering support to the Commission since its inception.
“The achievements recorded so far can be attributed to the support from the Ministry,” He said.
The ES equally seized the occasion to inform the meeting of the operationalization of the downloadable software application for registering PWDs which can also register any complaints arising from discrimination against PWDs.
While leading the PS on the facility tour of the Commission, the ES explained the importance of establishing some facilities which will help blind persons to function effectively in an office environment.
“I am also glad to inform you that lawyers with disabilities  can now transcribe  the letters  of their litigation into brail and prove their abilities in courts.”
He further thanked the PS and the Minister for opening the platform for the inclusion of PWDs in the Social Investment Programmes.
According to him, this has given PWDs some level of hope in alleviating their sufferings and sustaining their livelihood.
The Permanent Secretary, Federal Ministry of Humanitarian Affairs, Disaster Management and Social Development Mr. Bashir Nura Alkali during the facility tour made known the commitment of the ES and members of his staff in making the Commission functional in the last one year is quite overwhelming and commendable.
The PS who could not hide his excitement at the notable achievements recorded at NCPWD especially in the execution of projects lauded the ES for his unprecedented show of passion towards advancing the course of Persons With Disabilities.
Speaking further, Alkali buttressed the importance of accountability and stewardship in Civil Service as exemplified by the Commission’s helmsman.
Post Views: 193

Burger King employee is FIRED for refusing to serve a deaf...