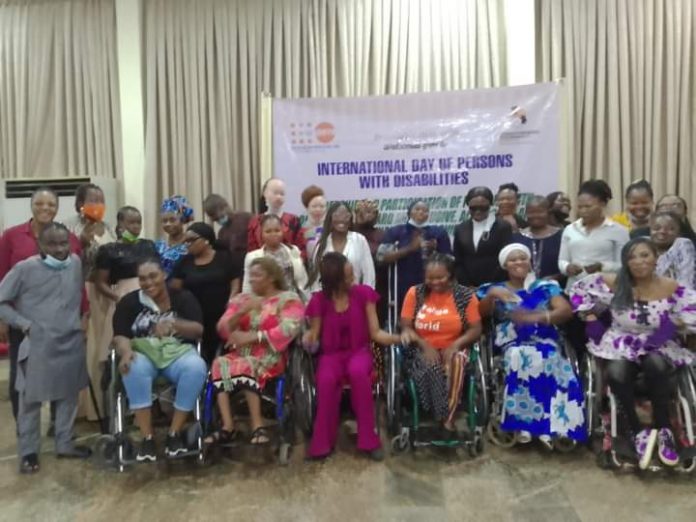 Advocacy for Women With Disabilities Initiative, AWWDI has argued that Women and Girls with Disabilities are one of the most vulnerable and marginalized groups in the society.

Executive Director of the group, Patience Dickson revealed this in a factsheet where she appreciated the myriads of difficulties these women and girls experience in the society. The event, 16 days of activism was organized to concide with the International Day of Persons with Disabilities.

It also seeks to promote an understanding of disability issues while mobilizing support for the dignity, rights and well-being of Persons with Disabilities.

The theme for this year: Leadership and Participation of Persons with Disabilities Toward an Inclusive, Accessible and Sustainable Post Covid-19 World comprehensively addresses the need for PWDs to take their rightful place in leadership positions in order to achieve desirable levels of Inclusion.

Dickson says it is pertinent for all Persons with Disabilities to be given opportunity to fully participate in their communities.

She noted the coincidence between this year’s International Day of Persons with Disabilities and 16 days of activism organized by AWWDI to create awareness on Gender based violence for all women, including women and girls with disabilities.

“As we reflect on this day we must count the progress made so far in Nigeria and how far we still expect from the government, stakeholders and international community.”

According to her, the Disability Bill and establishment of a Disability Commission is a good decision in the right direction. She however reiterates that much still needs to be done, most especially for women and girls with disabilities.

The published factsheet, she believes will aid a better appreciation of the difficulties WGWDs are going through in Nigeria.

According to Dickson, “Girls and women of all ages with any form of disability are generally among the most vulnerable and marginalized in the society.

“Less than 5 per cent of children and young persons with disabilities have access to education and training; and girls and young women face significant barriers to participating in social life and development”.

Read Also: AWWDI Advocates For The Rights To Self Determination And Access To Justice For WGWD

“Every minute, more than 30 women are seriously injured or disabled during child birth and labour. However, these 15 – 50 million women generally go unnoticed.

“Women with Disabilities of all ages, often have difficulty with physical access to health services. Women with mental disabilities are particularly more vulnerable.

Meanwhile there is limited understanding, in general, of the broad range of risks to mental health to which women are disproportionately susceptible as a result of gender discrimination, violence, poverty, armed conflict, dislocation and other forms of social deprivation” (Article 12) (Twentieth session, 1999, paragraph 25).

AWWDI charges the government and all the major stakeholders to include women and girls with disabilities in government decision making processes and make health care facilities accessible for WGWDs.

Dickson also urged government and stakeholders to create a platform for leadership for women and girls with disabilities alongside more awareness on the gender based violence experienced by them.

Groups Give Succour To Over 500 Persons With Disabilities