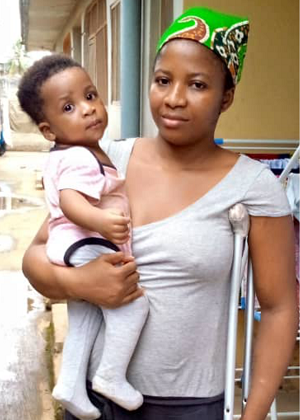 •Says mum also kicked her out

For Cynthia Amaka Okoro, a 28-year-old graduate of Physics and Electronics, life has not been fair. Amputated as a student and impregnated by an abusive partner, she now lives in utter despondency. Gbenga Aderanti writes.

Her facial appearance portrays her as one of the beautiful models advertising firms would love to introduce to their clients as the face of their beauty products. There is indeed no way anyone without a hint on her life story would imagine the vicissitudes of life she has had to pass through. Cynthia Okpara, a 28-year-old graduate of Physics and Electronics from Imo State Polytechnic, Umuagwo, became an amputee while she was still a student of the school. As if that was not enough, an abusive partner got her pregnant and she was thereafter rejected and disowned by her mother.

While she is grateful to her friend, who has been gracious to take her in as a squatter, she says the thought of suicide has not stopped crossing her mind and is only being held back by fear of what would become of her 10-month-old baby.

Her plight began in 2013 when she was involved in an accident while returning from school.

A medical report from the Imo State University Teaching Hospital, signed by orthopaedic surgeon, Dr. Okafor Bonny, noted that Cynthia was brought to the hospital on February 20, 2013 with the examination done on her showing a mangled left lower limb with no distal pulse present.

The report added: “The limb was looking pale and extremely cold. So a diagnosis of left lower limb gangrene extending to the proximal thigh was made. Patient had an above knee amputation of the left lower limb on the 2nd of March 2013.

“Patient was managed for three weeks and discharged in satisfactory condition on crutches.”

Cynthia recalled that while she was in the hospital, she enjoyed so much support from her parents, especially her father. Unfortunately, her father, who she regarded as her best friend, died; a situation she said caused her to regret coming into the world.

She said: “When I look at my situation, my child is the only reason why I’m alive. I would have since ended my own life. My condition is making me to think of committing suicide.”

Asked what the problem was as she repeatedly gasped for breath while speaking with our correspondent, she said: “I have ulcer and malaria and I have also been stooling blood.”

For Cynthia, getting amputated was bad, but getting pregnant for a partner she described as abusive was worse. Describing the one year she spent with her partner Okpara, whom she met on Facebook, as miserable, Cynthia recalled how she cried every night and repeatedly asked herself how she found herself in such a mess.

She recalled that for four months after their first meeting on Facebook, they engaged each other in animated chats. She said she was honest enough to tell Okpara about her physical condition but he did not believe her until they met physically about four months later.

While they were dating, she recalled that it was love all the way; adding that as soon as she got pregnant, the love that Okpara professed for her literally disappeared.

She said: “My leg had already been amputated before we met. When we eventually met physically, he said he never knew I was telling him the truth about my leg. We chatted for like four months before I eventually met him.”

Things would probably have been better if they had any mutual friend, but that was never the case, as they never allowed anybody in their space and neither of them took the other to meet their family members.

Not long after they met physically, Cynthia said she started staying with Okpara late in 2019 and become pregnant in 2020.

Cynthia’s mother was exasperated when she realised that her daughter was pregnant and decided that she would not allow her to remain in the family house. The only option left for Cynthia in the circumstance was to stay with Uche, which she eventually did.

“I have tried to call her and many people have also tried on my behalf but she refused to take me back,” Cynthia said of her mother.

Reminiscing on her life with Okpara, she said: “His name is Okpara. I was visiting him and along the line, I got pregnant for him and his character changed. He started beating me any time I made any slight mistake.

“The only time he saw his son was when I gave birth to him. And ever since, he has not seen him.

“Okpara is a hot tempered person. He might come and say I did not cook for him and he would start beating me.

“At times, somebody might have offended him before he came home and he would transfer the aggression to me.

“He might even come home and see something somewhere; he would start shouting and asking me why I didn’t remove it and it would lead to him beating me again.”

Cynthia said she never bothered to report what was going on to anyone because it never occurred to her to do so. The only intervention she got was from neighbours who advised her to stay away from Okpara because it appeared as if he never loved her and Cynthia was the one forcing herself on him.

She said: “Neighbours told me that the boy did not love me and that I should go. They said it seemed as if I was forcing myself on him. Eventually, I thought they could be right, so I later decided to leave.”

She is however worried that for more than one year now, she has not been able to contact her former heartthrob and she does not know any of Okpara’s family members she can talk to.

“He never took me to his village while we were together. He only told me that he was from Abia State,” she said.

She also said she has not been able to access her Facebook account through which she could have reached him, because it was blocked when it was discovered that the account was about to be compromised.

Kabba 2022: OPU Donates Wheelchairs, Crutches To Over 1,500 Persons With Physical Disabilities In Okunland

Ghanaian teacher with no arms holds chalk in mouth to write...