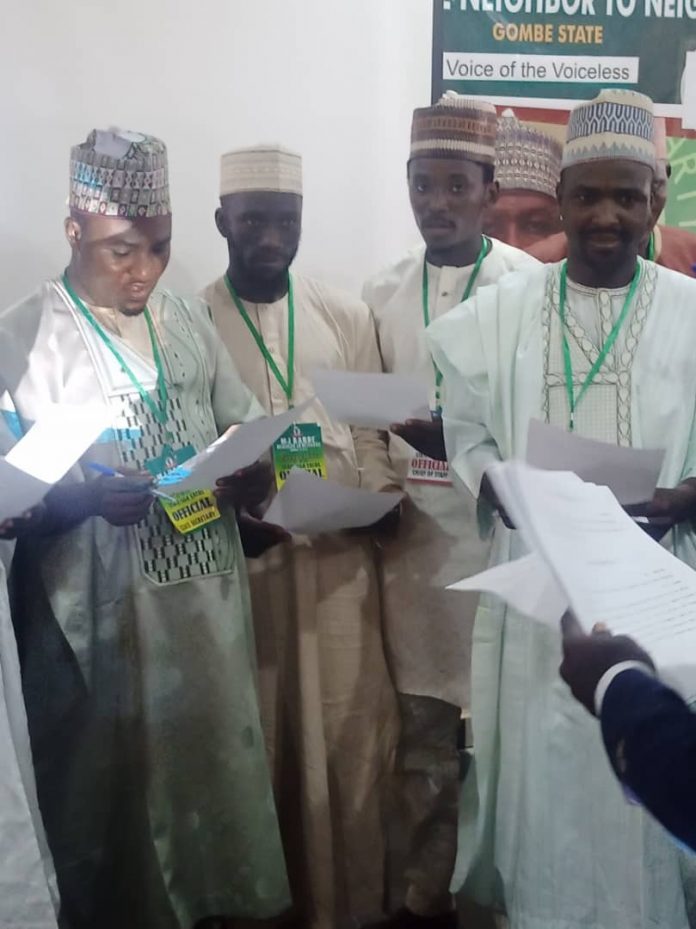 A group of politically inclined individuals under the aegis of Gombe State PDP Deaf Supporters Forum has tasked PWDs in Gombe State to take advantage of the opportunity availed them by the newly enacted electoral law which make provisions for transition from indirect to direct primaries elections passed by the National Assembly and assented to by President Muhammadu Buhari. The group charged PWDs to come out en-masse to participate actively in politics in order to achieve full political freedom and societal integration.

Chairman of the group, Yusuf Mohammed Lawan made the plea at the National Library on Saturday November 20 at the swearing-in ceremony of State and Local Government Executives of the M.J Barde, Neighbor to Neighbor Support group.

Lawan said, “despite our small number we can make a difference, let us all come out to support politicians who have PWDs interests in the upcoming 2023 elections.”

Lawan, who was obviously dissatisfied at the low turnout of PWDs in politics expressed great hope that the direct primaries enshrined in the new electoral law will broaden chances of PWDs actively participation in politics as it will stimulate more intense interest in politics.

He admonished fellow PWDs to make judicious use of the new change by mobilizing as many people as they can. These include siblings, spouses, relatives, friends and well wishers. He charged them to support only disability-friendly politicians in the upcoming 2023 general elections in Gombe State and Nigeria at large.

The Chairman of M.J Barde Abdullahi Mohammed Yahuza, in his speech noted that his principal Alhali Muhammad Jibrin Barde popularly known as Dan Barde was a disability-friendly leader who always has the interests of PWDs at heart.

Yahuza said, “One thing nobody can take away from Dan Barde is that he can communicate in sign language”.

He further reassured that the M.J Barde Neighbor to Neighbor Support Group intends to work hand in hand with PWDs from all walks of life to achieve its mandate.

Inclusive News Network, INN gathered that some political groups in Gombe State have started including PWDs in their folds with the aim of fielding them in the 2023 electioneering campaign which is fast approaching.

IFA Tasks Women With Disabilities To Be Proactive On Political And...

IS HEARING IMPAIRED AN ACCEPTABLE TERM?