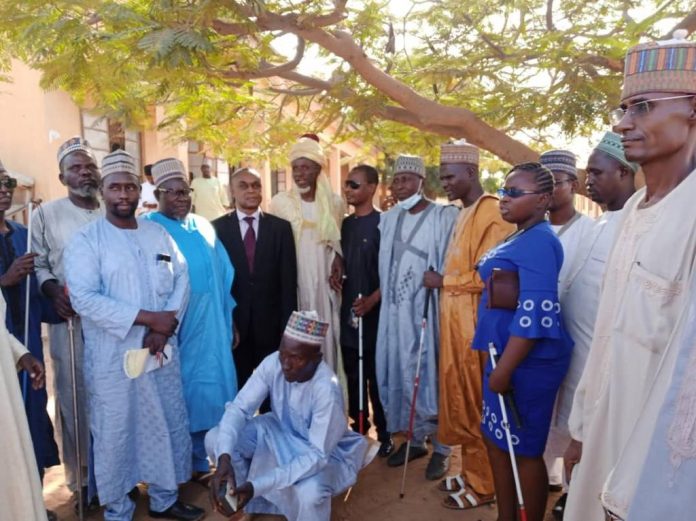 Nigeria Association of the Blind (NAB) has presented accessible educational booktitles to Government School for the blind Katsina.

It is part of the activities under the project being implemented by NAB with support from the World Intellectual Property Organisation (WIPO) under Accessible Books Consortium based on a grant awarded to NAB which geared towards producing educational print materials to accessible formats (Braille, EPUB, DAISY).

The accessible educational materials when produced will be presented to six inclusive secondary schools in the North West and South South region in Nigeria.

In order to bridge this gap, delegates of NAB led by the National president, Mr. Ishiyaku Adamu alongside the Chair, education committee of NAB, Mr. David Okon, the zonal coordinator of the North West region, Mr. Haliru Usman and representatives from the NAB Secretariat the Admin & assistant Admin, Miss Odusanya & Mr. Kolejo, respectively were in Katsina on 11th November, 2021 to present thirty- eight copies of educational book titles in braille formats. The subjects produced in braille were English language, Business studies, Commerce, Government, History, Literature in English, Economics, integrated science, and with emphasis on STEM subject (Biology, Chemistry, Computer) to Government school for the Blind Katsina. The books are for both the junior and the senior sections.

“In addition, Publishers are not aware of the ratified Marrakesh Treaty signed in October, 2017 which is designed to empower publishers to produce their materials in accessible formats to compliment the three system of reading (audio, visual and touch)” he added.

Speaking further, he said that it is less than 1% of the materials in print that is accessible to the blind which indicates that a large number of Blind persons in Nigeria are not able to access books, newspapers, government publications, public awareness leaflets, consumer information and other materials that are ordinarily available to sighted people, because of the high production cost associated with accessible publishing.

“As we present these thirty- eight accessible educational booktitles in braille and seventy- four EPUB formats to Government School for the blind Katsina, it is our hope that the federal and state government, the private organisation and international organisations will embrace born- accessible books to be given to inclusive/ mainstream schools to ensure no one is left behind and that blind and partially sighted students can compete favourably with their counterparts educationally, professionally, etc” he solicited.

He urged the beneficiaries of the project to be strong in their resolve to achieve milestones in education and encourage them to make effective use of the educational booktitles to be the best among the rest.

The presentation which was done by Administrative Officer at NAB, Miss Oluwakemi Odusanya, took place at the premises of the Government school for the blind Katsina in the presence of Prof. Sanni mamma, Vice Chancellor, Umar Musa Yaradua University, Associate prof. Gadamosi Lawal, Commissioner of education Katsina state and also rep. the Governor of Katsina state from Isa Kaita College of Education, the Principal of the School, Mr. Lawal Jubril, Garuba Mohammad Nasuta, Emir of the Blind in Katsina and Mr. Gambo Tairu, APC Disability leader Katsina state.

How Dufil lifts the visually impaired through investment in education