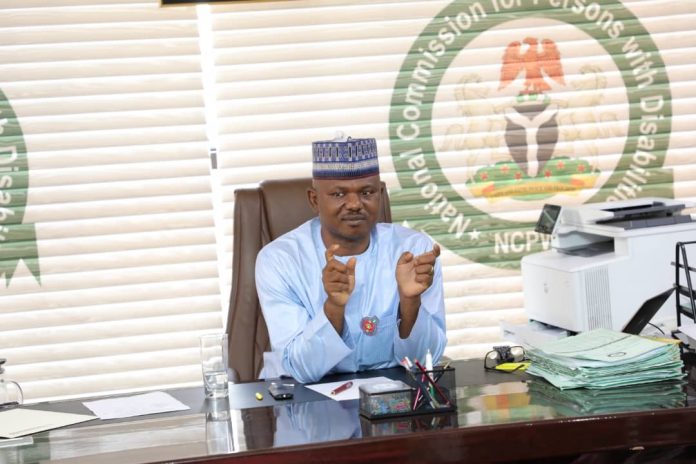 The Executive Secretary National Commission for Persons with Disabilities Mr James David Lalu has announced that minimum standards for constructing ramps and other forms of Accessibility requirements is currently being designed for general compliance.

The ES disclosed this while hosting a group of Parents’ Teachers’ Association (PTA) executives from the Center for Children with Special Needs, Maitama recently in Abuja.

He decried the poor construction of ramps in public places which even cause more harm to persons on wheelchairs when they use such facility.

Lalu also seized the occasion to appreciate the elderly among the delegation for their show of passion towards Children with various forms of disabilities.

“Every child irrespective of his condition has the right to free and quality education,” he said.

He further stated that these children with special needs when aided become exceptional and most times win awards with scholarships to further explore their strengths reaching for the stars.

Speaking further, the Commission’s helmsman informed that there will be scholarship schemes for children with disabilities starting from 2022.

Filled with excitement, the leader of the delegation, Mr. Toromade Olabisi expressed his appreciation and commended the ES for receiving the group despite the short notice.
He hinted that the CCWSN has been operating in the last fifteen years with about Thirty five children with different disabilities ranging from Autism, Cerebral palsy, Deafness, intellectual deficiency, and Down syndrome.

He seized the occasion to appeal for assistive devices to aid the learning of the children.

The group also appealed for the Commission’s intervention to protect children from further discrimination in gaining admission to further their education to Higher Institutions.

Another submission made by the group was to ensure that the National Hospital and some Banks comply with the minimum accessibility requirements for ease of movement by PWDs.

Sammie Recounts Making It To BBNaija Despite His Speaking Disability