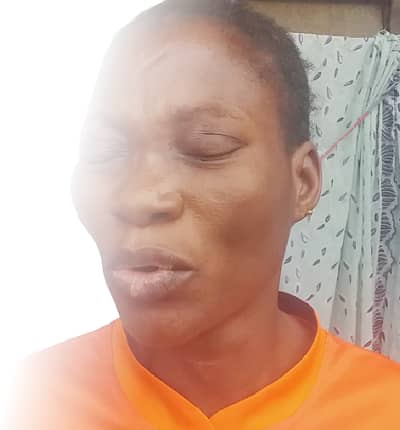 Darkness descended on the world of Abidemi Sanyaolu 11 years ago following the loss of her sight to a mysterious illness.

Since then, she took solace in the fact that her 14-year-old son, Mubarak, always ensured that she was well taken care of before he left home for school in the morning and upon his return in the afternoon.

Another ugly fate befell Abidemi recently as the family lost Mubarak’s older brother to a strange illness, leaving Mubarak as the only surviving child.

The darkness that had enveloped Abidemi’s life tickened further on November 3 with the gruesome killing of Mubarak during a protest provoked by the alleged killing of a tricycle operator by the police on the Ajasa-Command route.

Until his death on November 3, Mubarak, an SSS1 student of District Secondary School, Meiran, was also a vulcaniser apprentice in the neighbourhood.

On the fateful day, the lad was said to have hurriedly fed his mother on his return from school in the afternoon and left for the workshop when a protest broke out between the police and tricycle operators who accused the former of stabbing one of their members to death for refusing to give an officer the sum of N100 as bribe.

A detachment of operatives from the nearby Meiran Police Division were deployed to disperse the crowd of protesters when Mubarak was hit by bullets allegedly fired by one of the policemen, ripping his intestine open.

Lamenting the incident and the ugly fate that has been her lot in life, Mubarak’s mother said: ”I lost my eyes mysteriously after I took ill about 11 years ago.”

”My husband works as a Keke Marwa (commercial tricycle) operator, so he leaves home early. Our son, Mubarak, has been the one taking me around to have my bath, use the toilet and even feed me.’

”He was a student and apprentice vulcaniser. He goes to his trainer when he returns from school and was returning home from work when he was killed. ”

Abidemi, swathed by sympathisers, told The Nation amid lamentations at her residence on Thompson Alade Street, Ajasa Command area of Agbado-Oke-Odo Local Council Development Area, also said that Mubarak was trying to cross the road after the owner of the workshop where he was training to become a vulcaniser had dismissed him and other apprentices for the day and shut his shop when policemen who were drafted to quell the ongoing protest started shooting indiscriminately.

“One of the shots hit my son and killed him instantly. I was at home when some people rushed in and laid my son’s body at my doorstep. He was 14 and my only guide after I lost my sight. When they brought his body, I could only touch it to ascertain that it was him,” she added.

In search of justice for her son, the distraught woman rushed to Meiran Police Station crying for justice, but her presence in company with other sympathisers was not welcomed as men of the police division allegedly threatened to shoot at her and the crowd that accompanied her to the station.

She said; “I was held by the hand and taken to the Meiran Police Division by sympathizers, but the policemen at the station threatened to shoot at us, causing the people that took me there to hurriedly disperse and brought me home, saying that they didn’t want the police to kill me the way they killed my son.

”I only recently lost my older son. Now the police have killed my only remaining child and I am left with nothing. To make matters worse, the police authorities have not come to commiserate or sympathise with us as we speak.

“I have no hope again because the boy was my only hope for the future. I have lost my sight and cannot see anymore.

“I want justice for the sake of my innocent son killed by errant policemen,” she added.

Abidemi’s husband and Mubarak’s father, Olamilekan Sanyaolu, a commercial tricycle operator, told our correspondent that his son was killed by policemen drafted to the scene of the protest.

He said: “My son was returning from work. His boss actually closed the shop and asked all the apprentices, including my son, to go home when policemen started shooting sporadically.

“Unfortunately, he was killed by a stray bullet while crossing the road on his way home.

“I was seated in a tricycle in a compound nearby when people rushed in and asked me to come to come and see something. On getting there, I discovered it was my son that was felled by police bullets.

He was in a pool of blood on the floor. But I was prevented by the police from taking his body away because the policemen evacuated his body.

“I saw my son’s body being taken away by the police in their van, and as we speak, the police have yet to release his body for burial.

“He was the one running errands and taking care of his mother who can no longer see. He would take her to the toilet and the bathroom and feed her before going to school in the morning and on his return in the evening before going to the shop here he was an apprentice.

“I want justice for my son. He was my only hope and I am crying out now so the police authorities can do something about it.”

Also speaking with our correspondent, Mubarak’s boss, Taofeek Abidemi Quadri, said: “Immediately the protest commenced, I closed my workshop and asked all my apprentices to go home.

“I had barely left the place when gunshots started booming and I was told that Mubarak had been killed by a stray bullet. They shot directly at the protesters and one of the shots killed Mubarak.

“I tried to carry him (Mubarak) from the floor, but the policemen fired teargas canister and I had to flee the scene due to the effect of the teargas on my eyes.

“We want justice for the soul of Mubarak because of his parents, especially his mother who has lost her sight.”

“The Commissioner of Police, CP Hakeem Odumosu, has ordered that the matter be transferred to SCID, Panti for diligent investigation.

“You can rest assured that we will issue a public statement at the conclusion of the ongoing investigation,” he said.