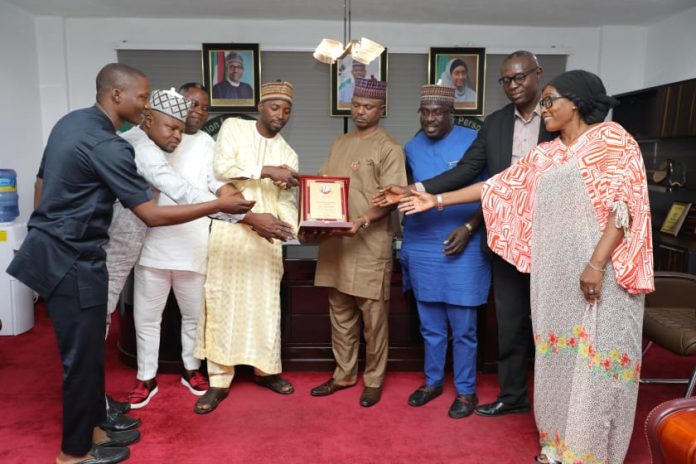 In a press statement released by head of media and publicity, NCPWD, Mbanefo JohnMichaels I, the ES made this claim recently in Abuja when he received in audience some Special Assistants to Caretaker Extraordinary Convention Planning Committee of All Progressive Congress (APC) who payed him a friendly visit to congratulate him on his appointment as pioneer CEO/ Executive Secretary of NCPWD.

While addressing the delegation, the ES stated that since the amalgamation of Nigeria, successive governments have grappled with how to bring into existence a body of laws that will provide the desired backing to the rights of persons with disabilities.

The two houses that make up the National Assembly have at one point or the other deliberated on the bill before them and had even passed the disability rights bill on several occasions.  Pressures continued to mount from all corners; from Human rights activists to the community of persons with disabilities but none could get the icing on the cake, until the arrival of All Progressives Congress and the election of President Muhammadu Buhari who upon his assumption of office in 2015 avowed to bring change into the social order.

The Disability bill was presented to him in 2018 and by January 2019, he accented to it thereby making it law and this singular act he said, did not just increase the President’s popularity but brought better hope to the over 30 million persons with disabilities spread across the country.

“Many still continued to wonder how the table turned so swiftly but they should not forget that Mr President has been with the masses all these years of his political struggles” he said.

Lalu further disclosed that President Muhammadu Buhari’s creation of the Ministry of Humanitarian, Disaster management and social development sent a strong signal of the passion he has for the downtrodden and this was the reason for the success “we are all witnessing in the establishment of the National Commission for persons with disabilities today”

He stated that the platform has opened vistas of opportunities to PWDs in terms of visibility and inclusiveness in the process of governance which has prompted enviable dividends of democracy .

Earlier in his message, the spokesman of the team Mr Godbless Diriwari, who is the Special Assistant to Senator David Lyon thanked the ES for his hospitality and urged him to keep up the good work at the Commission, stating that his presence at the Commission has made PWDs’ issue the prevalent discourse in today’s Nigeria.

The group further presented the ES with an Award of excellence.

NNAD Election: I Will Bring The World To Nigeria – Chidi...

Babies conceived by women above 35 years stand the risk of...