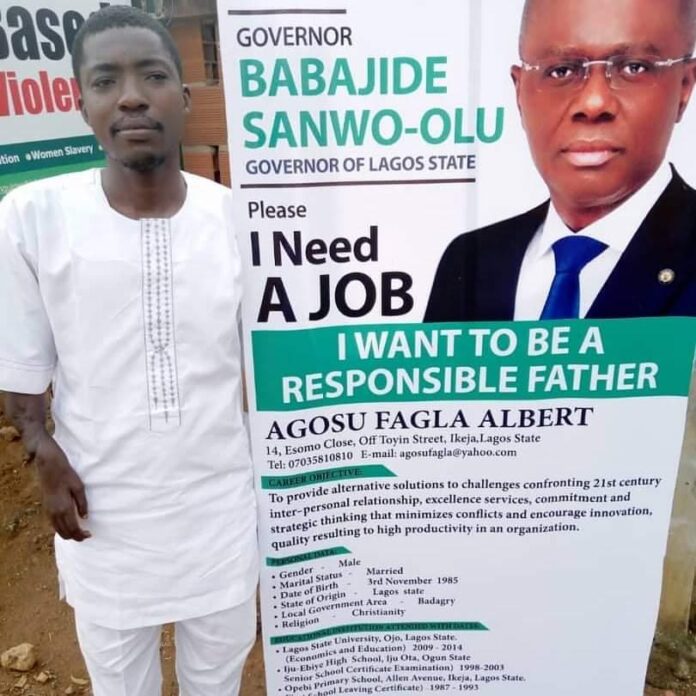 A graduate with physical disability in Lagos State, Agosu Fagla, has written an open letter to the state governor, Babajide Sanwo-Olu, seeking his help for a job.

Fagla caught the attention of people when he made a billboard with the inscription, “I need a job” and stood at the gate of the state secretariat at Ikeja.

The young man claimed his disability came from an accident he was involved in at the age of 5. He, however, said this had not limited him.

According to him, he bagged a bachelor’s degree in Economics but had been unable to secure a job due to the stigma.

He wrote, “Sir, I am Agosu Fagla Albert from the Badagry Local Government Area, Lagos State.

“Sir, 8, October 1991, I had a motor accident when going to school at the age of 5. I was then a pupil of Opebi Primary school, Allen, Ikeja, Lagos, under the leadership of the headmaster (Mr T. Adebiyi).

“I was then rushed to Omotayo private hospital, Ikeja. Then, later referred to National orthopedic hospital Igbobi, Lagos where I stayed for a year and later discharged with my right hand paralyzed, up till now i can only make use of the left hand.

“Sir, out of curiosity for learning despite all odds, with the support of God and well-meaning Nigerians; I later proceeded to further my education from basic stage to tertiary level – where I graduated with B.Sc (Ed) (Economics Education) 2014 at the Lagos State University and served at Local Government and chieftaincy affair, Jos North Local Government (Plateau state) from 2014-2015, till now without a meaningful and deserving Job.

“Due to my condition and the stigma attached to it, some employers believe I’m not employable. I have only been surviving on family support. To God be the glory, I have been able to write perfectly with my left hand.

“My Dear Governor sir, I have followed with passion your success stories in Lagos State and your passion for the less privileged.

“I am compelled to contact you through this medium to come to my aide by way an immediate appointment as a bail out of complacency, just so that I can assume a responsible citizen and be a good father despite my condition.

“Thank you sir, in anticipation of your compassionate consideration and God bless you abundantly.”

The state government had yet to react to the request of the man.

COVID-19: US evacuates 340 Americans from Nigeria