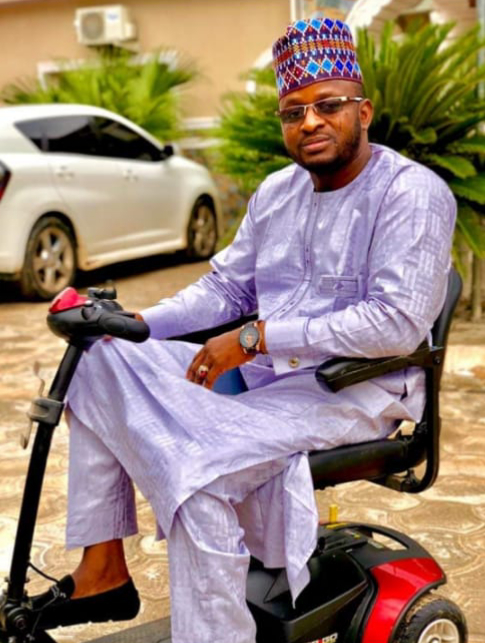 Since independence, participation of all categories of persons in the Nigerian political and democratic process continues to be appreciative. Right from the first republic to date, concerns about the inclusion and participation of Persons with Disabilities has always been a subject of agitation from all corners. The campaign, mostly driven by human rights activists and other disability actors achieved little because it used the charity model with campaigners mostly employing the pity, tokenism and medical approaches.

By the beginning of the fourth republic while women and youth groups were agitating for recognition and inclusion, some disability actors formed a strong movement aimed at achieving inclusion. This time however, it included the objective of having a legal frame work to prioritize, promote and protect Persons with Disabilities from all kinds of discrimination and stigmatization.
After decades of consistent campaign, advocacy and high level engagement, the dream remained far off as no political leader seemed to understand “the psychology of disability” nor the place of political will and commitment in eradicating the age long stereo-type, discrimination, stigmatization, cultural dehumanization, religious mockery and self defeat which societal deprivations brings.
Political leadership was clueless, the political parties were insensitive, Government structures lacked knowledge, the civil societies were frustrated and, th disability movement, got confused and divided.
Then came the build up to the 2015 general elections. Almost suddenly, the atmosphere got tense as human rights actors began to call on the government of the day to consider promulgating a Nigerian Disability Act. It was hoped that this would help Persons with Disabilities get a level playing field for participation in electoral and political processes in the country. Sadly, that hope, too, was dashed.

When the stakeholders of the Disability communities realized the gap in approaches and methodologies of engagement which failed previous attempts to secure legislation for Persons with Disabilities, they regrouped to reappraise and rejuvenate the process. The engagement was fruitful, and an entry point established.

Earlier in 2014, while efforts were on to form the All Progressive Congress (APC), the founders were magnanimous enough to identify Persons with the Disabilities as key stakeholders. They did this, not only by recognizing their vulnerability, rather, they created space for them at each structure of the party. To further demonstrate commitment, the then campaign council of Gen. Muhammadu Buhari appointed a member of the disability community Dr Samuel Ankeli as director disability affairs.
Furthermore, to practically demonstrate passion, desire and commitment, the All Progressive Congress elected a person with disability, Hon. Misbahu Lawal Didi at the party convention. Misbahu was appointed national Disability leader. Moreso, he was also part of the party’s National Working Committee. Hon. Misbahu’s time in ofice brought many glowing achievements to the community of persons with Disability at large.

First was the strategic repositioning of PWDs zonal leaders. Misbahu himself participated at various engagements of the party. This helped boost the Disability image both at party secretariat level and within the presidency.

Next, the APC, in its commitment, pulled down the yoke barriers, discrimination and stigmatization against PWDs. The new era began when the President signing into law the long awaited Discrimination against Persons with Disability (Prohibition) bill 2018. Now, this was one Bill which previous administrations vehemently denied assent.

Meanwhile, the leadership challenges which befell the party at a stage, and the consequential effect on members cannot be discounted. However, that not withstanding, the All Progressive Congress (APC) remain focused and determined on disability inclusion as enshrine in the spirit and letters of the party’s constitution.

Again, it is pertinent to note here that it is one thing to have a law and another to be implement it to the letter. One would therefore not be wrong to state here that the All Progressive Congress has, and will continue to have Persons with Disabilities feature in their agenda of planning and implementation.

Again, when the party was engulfed in leadership tussle, a number of analysts and political pundits commented on the party’s future. Would it cease to exist? For the average Person with Disability though, the concern was whether Persons with Disabilities will again have a platform like APC? The average PWD was more concerned if the kind of inclusion model shown in the party’s structures, from National to State level can be replicated? Soon enough, the divergent views and thoughts expressed by Persons with Disabilities on different platforms became much worrisome to the average Disability Actor.

The APC, as a legacy party whose ideologies, principles and aspirations for a better Nigeria is never in doubted or conceived of in bad light, quickly swung to action with leader of the party and President of the federal republic of Nigeria, Mr. Muhammadu Buhari (GCFR) adopting the call for a national Executive council meeting of the party.
The meeting went smoothly, and, as may be expected, Nigerians with Disabilities anxiously awaitef the outcomes.
It wasn’t long before news filtered in that the NEC, disbanding the NWC, had formed an 11- man National Caretaker and Convention Committee to be headed by another disability friendly Governor, His Excellency Mai Mala Buni (Master of Inclusion) as he is called in Yobe State.

The inclusion of Persons with Disability in the committee didn’t come to us as a surprise considering the party’s antecedents.
There’s however an euphoric and ecstatic twist to the subject with the appointment of Dr James Lalu.

Lalu is an amazing, dogged, and resilient politician with a good record of service to humanity in general and Persons with Disabilities in specific. A two-term special Adviser to the Plateau State Governor on Disability Affairs, a former member and Chairman, Plateau State Disability Rights Commission, former representative of Persons with Disability at All Progressive Congress national convention etc . Lalu as we fondly call him, is a disability development expert with years of experience and expertise in disability engagement, globally. And that’s why Nigerians with disability never doubted his competence to take disability inclusion to the greater heights.

Today Dr James’ achievement in a short period speaks volume. In an unprecedented manner, Persons with Disabilities are now engaged in national assignments, with a number of them forming part of the national campaign council. Note, such never happened before.
Today, through Lalu’s office, international organizations are now building capacities of leaders of persons with disabilities in the party. This giant stride is commendable and it is our hope others will learn from this.

The Marrakesh Treaty And Access to Information to the Print Disabled

My Tears For Nigerian Paralympians

4 ways to really make life easier for people with disabilities

Towards an Inclusive Covid-19 Vaccine Distribution and Administration