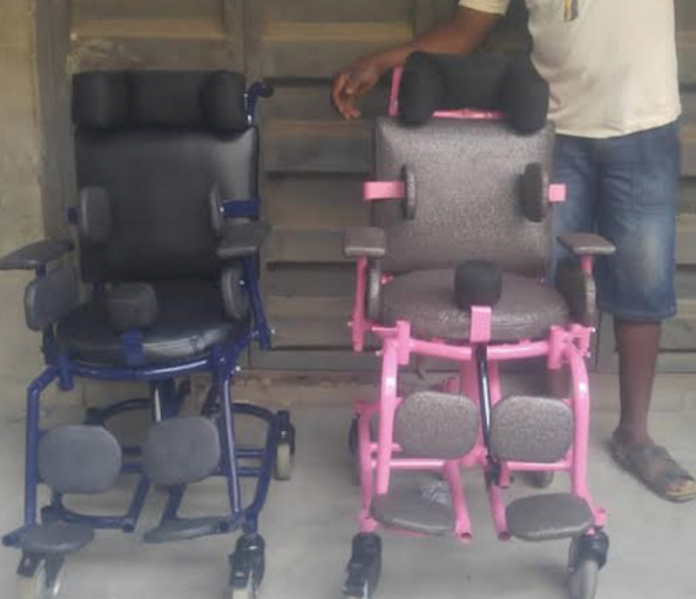 Most children with cerebral palsy need wheelchairs for mobility, but only a few can afford it in Nigeria. To fill that lacuna, Kingsley Okukpon Albert, a self-trained the technician, is fabricating wheelchairs locally and making them affordable for low-income earners, reports Vanessa Obioha

The COVID-19 pandemic came with a lot of uncertainties and hardships last year. One of such was the scarcity of wheelchairs for children with cerebral palsy (CP). The congenital disorder of movement, muscle tone or posture usually caused by an abnormal brain development often before birth affects about 700,000 Nigerians according to The Provost, College of Medicine, University of Lagos, Prof. Afolabi Lesi, in a 2017 report.

The professor added that over three million Nigerians are directly affected by it. The World Health Organisation also posits that over one billion people live with some form of disability in the world and the percentage is higher in developing countries.

For low-income households, carrying the child on the back is the available option. Ayinde is familiar with the struggles parents go through conveying their children to health centres for physiotherapy. She disclosed that most mothers who live in the outskirts of Lagos have to walk long distances, carrying their children on their backs to visit public health centres. This, she said, often results in backaches.

Blessing Kingsley, a parent of a child with cerebral palsy recounted the challenges of conveying her daughter from one place to another.

“If we have to go to Lagos State University Teaching Hospital (LASUTH) for her treatment, we will have to leave as early as 6 am. Sometimes, we don’t get home till late at night.”

Even before the pandemic kicked in, CP wheelchairs were scarce as most of them were imported. Ayinde revealed that between 2019 and 2020, the scarcity of CP wheelchairs was very high. Therefore, as countries began to shut their borders, ground international flights and halt production, parents of children with CP were deeply affected.

Enter Kingsley Okukpon Albert. When Albert met his wife Blessing a few years ago in Ondo State, his dream was to build a family with her and help her achieve her goal of becoming a university graduate. Blessing came from a less privileged home and was determined to pursue her education.

However, the couple’s plans were upended when their first daughter was diagnosed with cerebral palsy. At first, they thought she was under a curse that needed to be broken. The poor child was taken to different spiritual homes, endured different incisions all in a bid to make her ‘normal’. At one point, the couple was advised by a clergyman to give up on the child because the chances of her surviving five years were very slim.

Hurt that her dreams were crushed by her daughter’s disability, Blessing found it difficult to accept her as a child. But on her fifth birthday, she summoned the courage to post a photo of her daughter on Facebook. The feedback was overwhelming. Through that post, she was connected to Mofoluwasho Liasu, a lawyer who runs a Super Parents Foundation, an initiative created to support parents of children with disabilities and their vulnerable children.

“We support them morally, physically and in every way to relieve them of their burdens as we all know managing disability in Africa is expensive and difficult,” said Liasu.

These struggles, according to Liasu, include cultural and religious bias “that inflicts pain on them. The narratives that make disabilities seem like spiritual manipulation and witchcraft.”

This often leads to a lack of support from family and friends.

“Lack of medical care is also a challenge. Therapy and medications are so expensive and inaccessible which makes caring for them expensive especially for the low-income earners,” she added.

That encounter with Liasu did not only lead to the couple discovering that their child had cerebral palsy but also to Kingsley making wheelchairs for cerebral palsy children.

“Getting wheelchairs for their children is hard and almost inaccessible. During the pandemic, most parents couldn’t buy any as they are mostly imported,” said Albert.

He recalled an incident when one parent came from Osun to Lagos to buy a wheelchair for her child. She was told it cost N150,000 but on getting to Lagos, the price was pegged at N170,000. She returned home dejected. His wife, Blessing, also said that another parent from Imo gave her money to purchase a wheelchair through their supplier but since most countries were shut down, her money was refunded eight months later.

By November 2020, Albert set about fabricating a wheelchair to meet the demands of parents. Liasu provided financial assistance.

“I saw hard work, I saw passion and a very ambitious man. I had no choice but to support a man like that, coupled with the fact that he is a very supportive and loving father to his child with special needs and it is rare to see a father like that. Most fathers in Africa, once they discover their child has a disability, they abscond,” said Liasu.

Albert’s first attempt did not meet his expectations. However, subsequent efforts saw him receiving patronage from many parents.

Wheelchairs for cerebral palsy children come in different types depending on the functions. For instance, there are reclining wheelchairs that enable users to open the seat-to-back angle and elevate their legs. The movement is that of a typical reclining easy chair. One of the most common wheelchair enhancement features for cerebral palsy users is power tilt or tilt-in-space. Tilt-in-space chairs have special seats that can pivot 30-60 degrees upward with the push of a button (or manually) while keeping the hips and knees at 90-degree angles.

Albert’s wheelchairs come in a standard manual format, that is with a fixed seated position. However, his come with neck pads to keep the neck in position, as well as knee and leg pads. There are also armrests and straps to keep the child in a firm position as well as boards to place food. The wheelchair seats are wooden with leather covering. This type of cushioning may not be comfortable for children as long periods of sitting can cause damage to their skin and underlying tissue because of tension, friction, and the fragile condition of their skin. The condition is known as a pressure area. Most imported wheelchairs come with specialised cushions placed on the seat of a wheelchair to help reduce the pressure on the bony areas of the buttocks and tailbone.

Albert is yet to use stainless steel frames for his fabrications. Currently, he uses mild steel for his wheelchairs which easily rusts. These limitations often cast doubts on the suitability and durability of his works.

According to Efe Omudu, an engineer who majors in agro-equipment, stainless steel is perfect for fabrications.

“You have a variety of materials ranging from stainless steel, galvanised steel and other metals you can use. Stainless steel is perfect, esthetic but expensive. It doesn’t corrode,” he said.

He added that galvanised steel is the closest alternative to stainless steel and comes in different grades.

“Some are resistant to rust while others will rust with time.”

Of all steels, mild steel, he said, is the cheapest.

“Mild steel or what you call iron is very cheap but of very low grade. If you’re using it, you’ll need to find a way to coat it with other materials to improve its sensory appeal and prevent rust.”

Funds, it seems, is Albert’s biggest challenge. At the moment, he works alone and often makes the wheelchairs on demand. He also needs big machines to help with the fabrications.

“Funds and some technologies to be able to do more complex fabrications that will be more suitable. This will require massive funds and training too,” noted Liasu.

“Wheelchairs can be made locally,” said Omudu. “It mustn’t take the form of the foreign ones in its entirety. Some innovation may have to come in.”

Nevertheless, Albert’s wheelchairs have put a smile on many parents’ faces. Both Ayinde and Liasu have patronised him as a way of encouraging his efforts.

“I am impressed, and he is getting better with each fabrication. Very soon, he will be competing with foreign fabricators. It is impressive that someone with no formal training and support could do so much. I wonder what he would do if he could get some basic technical training especially abroad and grants from corporations and the government.”

So far, the Super Parents Foundation has purchased over 15 wheelchairs from him. Through referrals, other parents seek him, sometimes with specifications.

With these affordable rates, parents need not rob a bank to purchase one.

Albert’s wheelchairs may not be the best in the market but as Omudu pointed out, the purpose of the wheelchair is for ease of movement. With his wheelchairs, parents can move their children from one place to the other without stress.

This story has been supported by Nigeria Health Watch through the Solutions Journalism Network, a nonprofit organisation dedicated to rigorous and compelling reporting about responses to social problems, solutionsjournalism.org

Leroy Moore is on a mission to showcase African disabled musicians