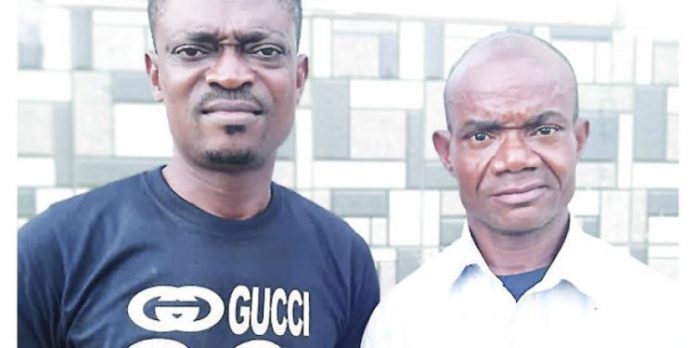 •With master’s degree, one wants job, another money to buy tricycle

Bright Chimezie Nwabuko and Ifeanyi Umah are two bosom friends from Umuahia, Abia State. They are both deaf. Age and academic differences have not in any way put asunder the robust relationship, as their friendship has lasted over 20 years, according to Umah. Nwabuko is on the down side of his 40s and had only secondary school education, while Umah is 39, and has a master’s degree from the University of Ibadan; but both have one thing in common, apart from being deaf, they are seeking assistance to set up their lives.

Getting both men to tell their life experiences did not come easy but in the end, we were able to pull through. Both men are not happy with society, which they accused of neglecting them because of their disability. Umah, the master’s degree holder, was the most pained.

“For me, the attitude of the society towards the deaf person is what is affecting we deaf people,” he started. “The society does not see deaf people as humans, they neglect us as a result of our disability.”

Umah said, after secondary school, he went to Federal College of Education (Special), Oyo State, after which he went to Aba to teach in a private school. Shortly afterwards, he left for the University of Ilorin, where he earned a bachelor’s degree in special education, before proceeding to UI for his master’s, in educational management.

The educationist told a touching story of how, after his National Youth Service, Oyo State government gave him a job and he settled down there. Umah said, soon after, an offer came from Abia State government and he jumped at that offer as he reasoned it would make him come home, particularly being the first child of his parents. But that turned out to be a mistake.

Hear him: “After my university education, Oyo State government gave me a job but, later, I was given work by Abia government. I used all the money I saved to carry my property from Oyo State to Abia, only for them to stop me from working.”

Umah, who said he is still single but intends to get married this year, wants Abia State government to give him a job or financial assistance so he can set up business, get money and repay his aged parents who he said invested in his education.

“I was supposed to have got married in 2020, but because of lack of money, it was put on hold. I’m engaged, and I must get married this year. My parents are still alive, but they are very old. I’m the first child in a family of two boys. All the responsibilities in the family are supposed to be on my head because I’m their first son.

“My parents invested heavily in my education and they have hope in me; they invested in me up to my master’s degree level, but look at where I am today, not able to take care of them. It hurts me that I’m not able to repay them because of lack of job as a result of my condition. I am struggling so hard to see they reap the fruit of their labour before they die because my father is almost 80 years”, Umah said.

For his friend, Nwabuko, who is married to a deaf woman, with whom he has three children, he needs a job or money to buy a tricycle with which to ply the streets of Umuahia to get money to fend for his family.

He attended Secondary School for the Deaf, Ofekata, Orodo, Imo State, after which he got a job at Golden Guinea Breweries, Umuahia, before he was disengaged after 10 years without payment, according to him. He later worked for Abia State government as a sign language instructor before he was equally disengaged.

When other things could not work out, Nwabuko turned a motorcyclist but, unfortunately, when government banned the use of motorcycles in urban areas of the state, he became jobless again. “I have gone for dry cleaning business training, all to make ends meet, but I don’t have the money to buy the required tools to take off. Presently, the building I started in my village has collapsed and we have no place to put our heads.”

It is for this reason that Nwabuko is seeking help from government, corporate and private individuals so that he can have something doing and take care of his young family.

My father hated me because I’m deaf but I made it-...

NNAD Election: I Will Bring The World To Nigeria – Chidi...