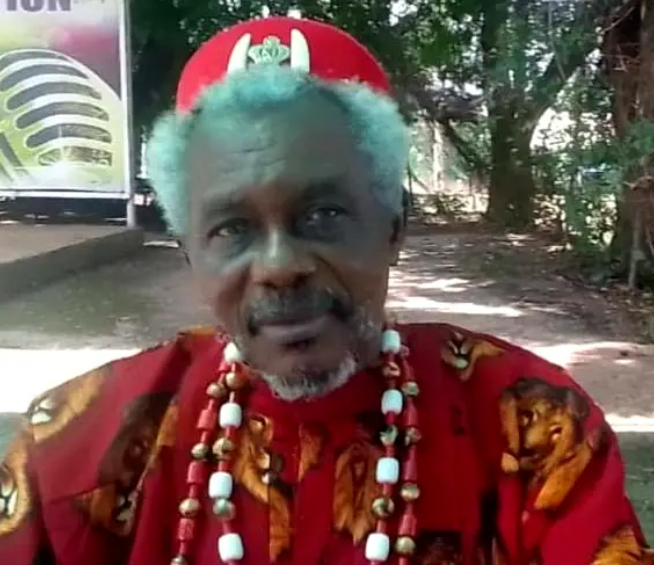 Traditional Ruler of Ihekwuenu in Aku autonomous community, Igbo Etiti Local Government Area, of Enugu state, His Royal Highness Igwe Christopher Okwor has reacted to the trending video in which a blind man’s house was demolished by yet to be identified persons in his community.

Igwe Christopher Okwor stated that contrary to the media reports, the said building was erected by those who vowed to intimidate him at all cost, and take over his ancestral land not minding that he is the traditional ruler of the community.

The traditional ruler alleged that Bar, Nnamdi Ezemagu in a plot to grab the land built the house knowing fully that the land belong to him.

Recall that in the trending story, it was alleged that the demolished building was being constructed for a blind member of the community to alleviate his condition.

However, Igwe Okwor stated that the structure in question was being built inside his compound by Barrister Nnamdi Ezemagu as a revenge for stopping him from land grabbing activities in the community.

Igwe Okwor who disclosed that Ezemagu’s family filled a suit in contention of the said portion of land at Enugu state high court, holden at Ogbede in Igbo-Etiti judicial division with suit number, 09//7/2019, wondered how they now turned around to ascribe ownership of the same land to a blind man.

“The virtually impaired 65-year-old man was never a party to the suit instituted by Ezemagu’s family ownership claim of the land”.

He recalled how the said Nnamdi Ezemagu had been threatening him and eventually assaulted him and members of his family in 2019 just because he adjudicated on Barrister Nnamdi Ezemagu’s encroachment on people’s land brought before him as the traditional ruler of Ihekwuenu autonomous community.

He regrets that Nnamdi Ezemagu was allowed to continue with his land grabbing activities, using hoodlums to breach the peace of the community despite numerous petitions he filed to the state Governor as the traditional ruler of the community, appealing for urgent intervention of the state government and security agencies.

Igwe Okwor called on the public and media organizations to disregard the contents of the trending video in which the blind man was deliberately dragged into a land dispute he knows nothing about, just to gain public sympathy.

In his response, Mr Nnamdi Ezemagu said that the only reason why the traditional ruler was mentioning his name was because he had resisted his attempts to grab peoples land in the community.

“He had said that as the traditional ruler, all the lands in the community belongs to him. As a lawyer I cannot allow him to do so. The land where the building was demolished was not the same land which is in court. That land is not in contention between anybody and it is not in court anywhere in Nigeria.

“The one in court is suit number OG/7/2019 where he encroached on my own family land. That land where the building was demolished belongs to the family of Anibeze Nnadi Ozor. The land in question is not a subject of litigation anywhere in Nigeria”