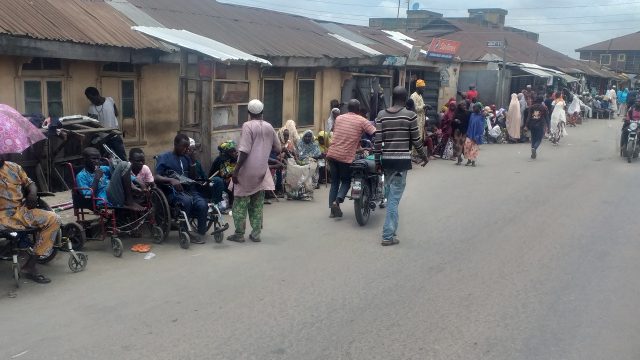 Despite repeated clampdowns on the street begging by Lagos State Government, the practice is growing by the day in various parts of the metropolis.
Not only have physically challenged persons embraced it, educated and non-impaired ones have joined the practice.

One of the favorable spots is Idi-Araba, a suburb in Lagos, where hundreds of beggars have taken over strategic locations.

Before it was not uncommon to see few physically, visually challenged and speech impaired persons at these locations, however, the tide is changing fast and the rate at which non-impaired persons besiege the begging spots is alarming.

Worried residents, who refer to them as ‘coordinators’, want the government to extend its enforcement to Idi-Araba.

A shop owner on Idi-Araba/Ojuelegba road, simply identified as Ahmad, said: “We call them coordinators because they don’t only frame themselves as beggars but coordinate alms sharing among their opposite peers.

“They are beggars with other sources of living as you can see, they are not always sitting with those who are physically challenged. They usually hang around waiting for givers.”

One of such coordinators is Isah Ahmed. He said begging is not only for persons with impairment but also physically fit people, who have been ‘messed up’ by the economy.

He disclosed that the number of non-impaired persons, who often beg on that axis is between 15 and 20

The 65-year-old said he graduated at Ahmadu Bello University (ABU), Zaria, in 1983 and has worked in the private sector, notably the Bank of North, now known as Unity Bank.

According to him, the money he gathered at the point of retirement in 1992 was spent on sickness, which struck him three years ago.

Ahmed explained that he also teaches in two private schools, where he makes N3, 000 per class.

He said: “I teach outgoing classes, preparing them for entrance examinations into higher institutions and for each class I teach, I receive N3, 000.”

As a family man, he lamented that the money he earns from teaching won’t sustain his family.
Noting that begging has become a national issue, he said: “It is just a form of relief, just to keep the body and the soul together. One just needs to beg to augment the high cost of living in Nigeria today.

“In those days, it was taboo to see a man from South-west begging as it is not our custom. Even those that are tagged as professional beggars don’t do it with pleasure. Rather, the economy has virtually turned everybody to a beggar.”

Sitting beside Ahmed and another friend of his, was also a young man, fondly called Pastor John, who claims to be a graduate of Cross River State College of Education.

Just like others, John decried how people treat them as beggars. “But how do we explain we are not? How do we better tell them that we are only looking for what to eat?” he queried.

John disclosed that he works as a gateman with a company in Yaba.

According to him, he resumes work at night and returns to the street in the morning to look for food before his salary will be paid at the end of the month.

Another of their mate, who gave his name as ‘AY’, said begging became an option when he started having sight problem.

AY said he was a commercial driver before his sight went bad.

He said: “For many years, I plied Oshodi- Mile 2- Orile route but stopped when I started having sight problem. As I am now, I cannot see far, except when you are very close to me.”

While narrating his ordeal, AY burst into tears, lamenting how he had sought help from NURTW, but got nothing.

“If in the process of looking for what to eat I get slapped, I won’t pick offence because begging is better than stealing,” he added.