The Deaf Community, Ndokwa West Local Government Area has called for a more holistic approach towards meeting the well being of its members. The group advocates equality and social justice even as it laments society’s negligence and marginalization of the Deaf in education, employment, health services and social life.

The call was made at the first Deaf Awareness Week organized by the Ndokwa West Association of the Deaf in commemoration of International Week of the Deaf. A core aim for the awareness program was to seek urgent interventions in the plight of Deaf members of the Local Government.

Chairman of the association, Enwemike Olumeka Daniel in his welcome address remarked that the celebration positively reflects concerns, hope, inclusion and understanding of “who we are” as deaf individuals with inherent Rights according to United Nations Convention on the Rights of People with Disability, UNCRPD.

“Education of deaf persons has really lagged behind. It is difficult to comprehend a Local Government as big as ours yet has no special school to accommodate deaf pupils and students.”

Oluwole revealed that parents and guardians who have the privilege, send their wards to far places like Asaba to receive formal education, while those who are unable to afford it suffer neglect, stigmatization and marginalization.

He added that Deaf children are not exposed to sign language because of their parents’ ignorance. According to Oluwole, the Awareness Week is meant to enlighten them on their responsibilities in equipping the Deaf child with the necessary weapons to fight for their rights.

Oluwole highlighted some challenges facing the Deaf community in the local government and urged State actors, including private individuals to support the Deaf, promote education and well being of the group through scholarship provisions, employment of their members, establishment of special school or an integrated one to accommodate deaf members, employment of special teachers in the school, etc.

A guest Speaker and Human Rights Investigation Expert at National Human Rights Commission, Uche Henrietta Uwadia-Garba spotlighted several challenges of Deaf persons in the society. She also highlighted how deaf people are excluded from family meetings and how decisions affecting them were usually taken without their inputs or consent. She called on stakeholders to assist in ensuring that sign language is incorporated into the educational curricular at all levels of education in the country.

Chairman of the occasion, Chief Godwin Emwemike represented by Peace Emwemike praised his cousin, Olumeka for holding high ambitions despite being deaf. He confessed to having looked up to him for advice as the need arose.

Peace however lamented the social exclusion and injustice being encountered by the Deaf in their daily lives. He narrated how a Deaf person lost a court case for lack of an Interpreter. He expressed dismay that most government officials invited to the event were not present, as he would have used the opportunity to lobby for assistance for the Deaf.

“Inclusion, says Peace starts with family at home because Family is fundamental. He expressed dismay that his deaf brother was consistently excluded from family meetings and other matters because the family believes he is incapable. He therefore advocated for social, education inclusion and equality for the Deaf.

Acting chairman, Delta State Association of the Deaf, Henry Obrutu Fred urged the State Government to establish special school in the Local Government. He laments that Deaf children in Ndokwa are forced to study outside the State or nearby local Governments for lack of special school in the community. He added that those who cannot afford to send their wards to study outside the state are forced to send their children to hearing schools where they lack specially trained teachers. That’s why most of them perform poorly in school. 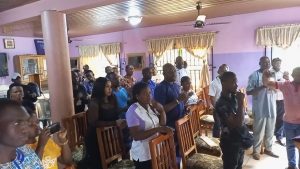 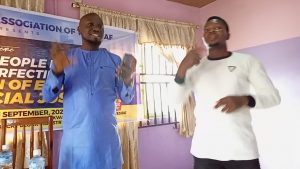 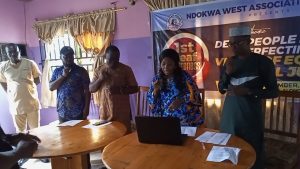 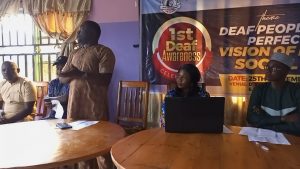 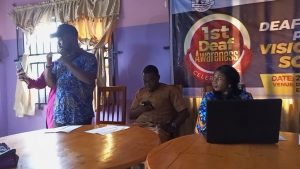