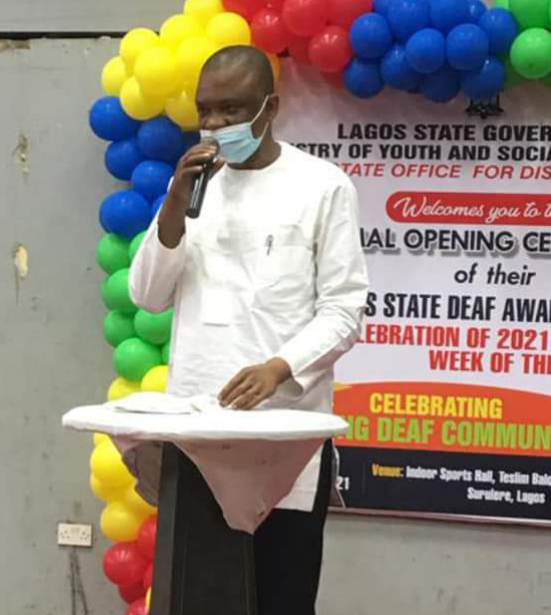 The Executive Director, Center for Citizens with Disabilities (CCD) David Obinna Anyaele has been honoured with an award of appreciation by the Lagos State Association of the Deaf, LSAD.

According to LSAD, the award is given in appreciation of Anyaele’s unwavering support and relentless guidance in leading the association to success.

The award event took place during the formal opening ceremony of a program organized by the association to commemorate the 10th edition of Lagos State Deaf Awareness Week, LSDAW, as part of activities for this year’s International week of the Deaf.

Anyaele, on receiving the award, said, “I commit to support Lagos State Association of the Deaf in creating awareness on the rights of Deaf persons. I also commit to sponsor three Deaf persons on ICT studies. I went further to reiterate CCD’s commitment to partner with the LSAD in securing funding for her activities.

“I want to thank the Lagos State Deaf Association for the award they gave me today. Together, we shall create a Lagos State that is free from discrimination on account of any form of disability.”

INN learnt that the event was Anyaele’s first public engagement since he fixed his new Myoelectric Control ‘below-elbow’ Prosthesis. He has been moving around for 9 months without artificial hands.

Anyaele thanked the Open Society Initiative for West Africa (OSIWA), the Chairman and Board of Trustees, CCD for roles played in securing him new artificial hands.