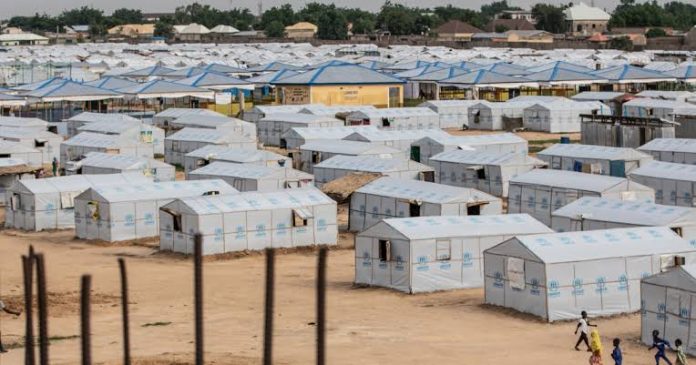 Over 5,817 Internally Displaced Persons, IDPs, in five camps located in parts of Benue state have received free medical care in a 10 day Camp 2 Camp Medical Outreach for Benue IDPs implemented by a Non-Governmental Organization, NGO, the Eunice Spring of Life Foundation, ESLF, in partnership with the Office of the First Lady of Benue state.

The 10 day intervention which was embarked upon by the state government through the State Emergency Management Agency, SEMA, commenced on August 16, 2021. The five camps visited were located in Gbajimba, Uikpam and Daudu lll communities all in Guma Local Government Area, LGA, as well as Abagena in the outskirts of Makurdi LGA and Obagaji in Agatu LGA.

In his presentation at the Dissemination Meeting of the Medical Outreach, the Monitoring and Evaluation Officer of ESLF, Mr. Simon Orjime said aside receiving treatment the beneficiaries also got psychosocial counseling.

He disclosed that a breakdown of the figure of the beneficiaries indicated that 3,582 of the treated IDPs were women and girls and others constituted 2,235.

According to him, “distribution by age indicated that the youngest beneficiary was one month old and the oldest was 111 years.

“There were 245 infants of zero to one year, and elderly persons of ages 60 and above. There was also disability inclusion in the distribution where about 35 beneficiaries were persons living with disability.

“The beneficiaries received prerequisite consultations, treatments as well as psychosocial counseling. Some of the treatments included major and minor surgeries.

“We were also able to carry out about 365 surgeries. These surgeries were done on 323 persons. Records shows that about 282 IDPs received one surgery each while two surgeries were carried out on 72 persons and there were nine persons who received three surgeries, minor surgeries up to three times for three different cases.

“Also handled within the period were malaria, peptic ulcer and others numbering over 300 different medical cases across the five locations.

“119 persons across the five camps who were suffering from depression were also referred for psychosocial counseling.”

Speaking further, the Monitoring and Evaluation Officer said “the figures before us indicated that we achieved a lot within the ten days and it did not come without challenges. The major challenge we had was our inability to meet out target.

“When we set out for the outreach we targeted to reach 10,000 IDPs across the five locations, that is 2,000 IDPs per camp; however the figure we were able to reach which was 5,817 only represents 58 percent of our target,” he said.

Governor Samuel Ortom represented by the Commissioner for Health and Human Services, Dr. Joseph Ngbea said the ESLF had contributed so much to humanity since its inception.

He said “the ESLF has added significant value to Benue healthcare delivery since its inception and I have been following the activities of the NGO through its various interventions.

“The Camp 2 Camp outreach was quite encouraging because government alone cannot meet the needs of the people. Government would not hesitate to collaborate with the foundation in healthcare delivery services.”

While calling on the Federal government to expedite action in resettling Benue IDPs back to their ancestral homes, the Governor recalled that “in 2018 the Vice President visited Benue and pledged N10billion to resettle the IDPs we urged that the pledge be fulfilled to help the IDPs returned to their homes.

“I also call on the federal government to stop playing politics with the issue of IDPs most especially in Benue state because 1.6million IDPs that we have in the state is quite a huge number. The federal government should intervene so that the inmates can return to their ancestral homes.”

The Executive Secretary of Benue State Emergency Management Agency, SEMA, Dr. Emmanuel Shior who was represented by the Senior Special Assistant to the Governor on Emergency, Mrs. Lizzy Aganyi commended all those who played several roles to ensure the success of the intervention.

Dr. Shior appealed to the Governor to support the outreach to cover other unreached IDPs camps. He also lauded the Pharmaceutical Society of Nigerian, PSN, and the ESLF for donating drugs to the outreach.

“I urge everyone not to relent in helping the IDPs. I know that our partners have been assisting us in the camps; I appeal for more support.

“I recall that when we embarked on this mission we had over 1.007million IDPs but now with the new arrivals the figure has jumped to over 1.6million. I must point out that anyone that is in doubt about these figures is free to do a verification. The Benue government has been doing so much for the IDPs; so we appeal for assistance from spirited individuals and organizations because the burden is overwhelming.”

On his part, Program Manager of the ESLF, Mr. Tine Agernor said the ESLF did an assessment of the health needs of the IDPs in different camps “and that was the reason we approached the Benue state government to organize the Camp 2 Camp Medical Outreach which they graciously funded.

“We have implemented the first phase of the outreach in five IDPs camp and out of the 1.6million in the camps we have been able to reach only 5,817. From the statistical analysis done that is about 0.39 percent of the total figure which when approximated is as good as nothing was done but we have touched lives.

“So we are looking at how we can create more partnerships with government, development partners and Civil Society Organisations to carry out a repeat of this outreach in the camps already reached and also take it to other camps that have not been reached and then to as many locations as possible where we have IDPs taking refuge.

“It is bad enough that they have been displaced from their ancestral homes and communities and we must do everything within our powers to improve on their health because we are told that health is wealth. We do know that as we improve on the health of the IDPs they will be better able to channel the resources that they have to other more economically meaningful ventures that will improve the quality of their lives and make them live better in dignity.

“We are also calling on the federal government to expedite action to ensure that the IDPs are returned to their ancestral communities because despite the interventions that we did, we had our psychosocial support sessions with them and what we kept hearing was that they felt bad that they were enclosed in IDPs camps and living on aid and support so want to go back to their communities to farm and feed themselves and then feel free like citizens of the country.”

“From available data at the end of the outreach it was very successful because usually in outreaches, especially when it’s free, you will see people coming from everywhere even people who are not sick. We recorded huge figure of people who were coming to benefit from the intervention. And I can say that for those that were sick they were treated; those requiring surgery got it and they also had psychosocial counseling. Referrals were also done. Generally it was all successful.

“We look forward to the next phase and we have to appeal to the Governor of Benue state to come to our aid again because he took it upon himself with his wife, Dr. Eunice Ortom to do the first phase. We know he is working with very tight budget given the economic situation but we know that he can still do it again given his commitment to the welfare of the IDPs and his service to humanity.

“We also appeal to public spirited individuals and organizations to come to our aid as we embark on the next phase of the intervention.”

On her part, Josephine Haba of Jireh Doo Foundation, said “what ESLF has taken to do is something every Nigerian, every Benuelite, every individual and human being should accept to do if you really are a person who also wants to live because if you want to live you sow into lives.

“But what they have done is like a drop in and ocean. I work with IDPs and I can tell you that every person is sick both mentally and physically.

“And I want to wonder why we have humanitarian workers in Nigeria and we do not have humanitarians responding in this case. The numbers and situation is verifiable. I challenge everyone and organisations to come forth and assist the state because ESLF can only do a bit and obviously cannot do it alone. We plead for support for the children to be alive.”

In his contribution, Executive Secretary of Benue State Primary Healthcare Board, Dr. Bem Ageda who commended the success recorded during the first phase of the intervention appealed to local and international organisations as well as spirited individuals to support ESLF achieve its target in the ambitious intervention.

IDPs to FG: Your romance with terrorists pushing us to join...