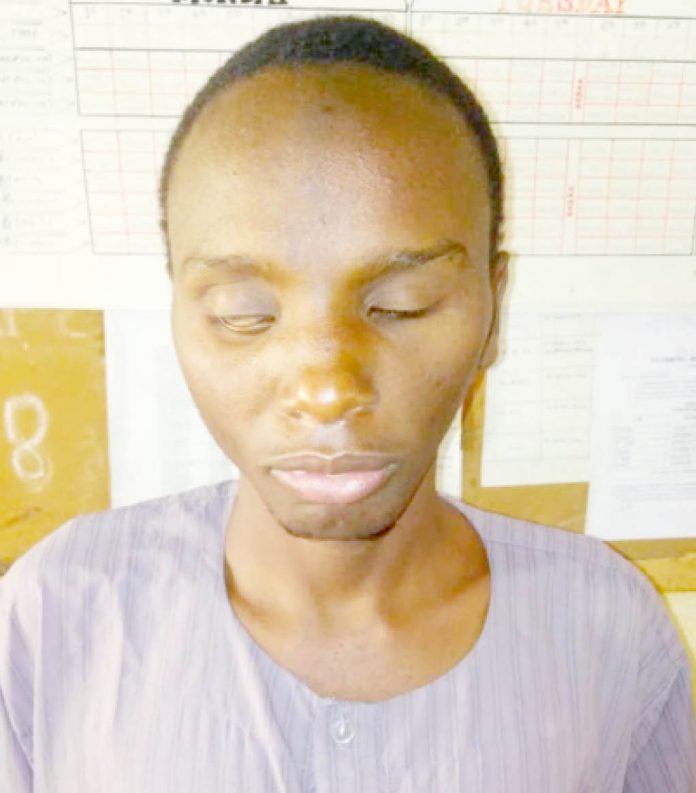 Unlike most people living with disabilities who easily go into street begging to earn a living, a few invest their talents wisely, endure the challenges and even impact on the lives of normal people. One individual in the latter group is Dahuru Abdulhamid Idris.

Dahuru Abdulhamid Idris, 28, was born with visual impairment (blindness) in the Kofar Dawanau area of Dala Local Government in Kano State but despite the disability, Idris discovered his passion for teaching and went all out to obtain a National Certificate in Education (NCE) in English/Political Science from the Aminu Kano College of Islamic and Legal Studies.

He did not stop at that, but has been serving as a volunteer teacher in a community school in his area since 2014.

In an encounter with Daily Trust, Idris said with the support of his parents, who are also poor, he was able to obtain his National Certificate in Education (NCE) and is now pursuing a degree in Political Science at the National Open University of Nigeria (NOUN).

“I was born blind, and all this while my parents and I have been struggling for me to be educated. I had my primary and secondary school education at Special Education School Tudun Maliki and from there I started my voluntary teaching job,” he said.

He said it was the society’s negative perception of the physically challenged people that forced him into teaching to make a difference and prove to the world that they can do what normal persons can do and sometimes even more.

Life as a student

Idris explained that it was not easy studying among normal people who have no disability, especially that he was blind and had no one to take him to school. He said the good friends he met at school usually help him to get into school and classes during lectures.

“I was the only person with a disability in our class during my NCE program and it was not easy at all. Even though I had good friends there to help me, still I had to battle with the lectures. So, I had to record the lectures on my phone and listened later for exams and so on. In addition, the lecturers were very supportive; they gave me special care.”

He said that was how he managed to finish the NCE program with the N6,000 he earns as monthly transportation allowance from the school he was volunteering with, adding “I teach my students English and Government and it’s going well.”

Idris said he finished his NCE with the passion to further his studies, but couldn’t due to financial challenges until he got a scholarship from the NOUN courtesy of a radio interview he had in Kano.

Featured in a radio program of Vision FM, Idris’ fluency in English language attracted the immediate past Vice Chancellor of NOUN, Professor Abdallah Uba Adamu, who phoned in during the program and offered him a scholarship and admission into the department of his choice in the university.

“I was honoured and overwhelmed when I got the admission as it has always been my dream to further my studies. When I got to the school, I received my admission letter and chose to study political science. I am still running my studies successfully.”

How I teach my students

Idris said none of his students has any disability and that he teaches in ways they understand easily, adding that it has been going well as none has ever complained about his job.

He said “I teach them through dictation and they copy it down. Afterwards, I will explain the lesson to them and they will understand because I test them by giving them assignments or asking them to do presentations in class.”

Why I chose not to beg

From childhood, his parents and teachers made him to understand that begging is prohibited in Islam, unless in certain circumstances, which disability is not included.

Apart from that, Idris said the act of begging subjects one to shame and affects their reputation, to the extent that whenever people see the person coming, they will think he is there to beg.

“I chose not to beg because I know its position in Islam and how it will affect me. I know that through studies and other struggles I can make an impact in my life and change other peoples’ lives. So, I want to change the narrative about people with disabilities. That is why I chose to study rather than begging,” he explained.

My aspirations in life

With an ‘eye’ on the future, Idris said he has many things to achieve in life and is making great effort towards accomplishing that; one of which is investing in education.

For him, the peak of what he wants to achieve in life is to be independent and to support his parents who are not rich enough to cater for their needs and that of the entire family.

He said he is also determined to go the whole hog in pursuing his studies so that he can become a lecturer in either a university or any other tertiary institution.

“Though I am facing challenges in my life, especially with the issue of financing my studies and other daily needs, I still feel encouraged and determined to achieve these goals. I know it’s difficult, and I have a long way to go, but I am still optimistic.

“My parents are poor and yet they managed to finance my studies up to NCE level. After my NCE, I applied for jobs but wasn’t lucky to get one. Despite furthering my studies now, I am still looking for a job that will at least help me finish my studies successfully. I’m still hopeful,” he said with a heavy sigh.

He also has a lot of business ideas because he believes there is a lot that a visually impaired person can do, so he says whenever he gets the right capital, he will venture into them.

“I can go into animal rearing like fish farming, poultry and so on. My problem is the capital or getting the job from which to raise the capital.”

Malam Dahuru, however, appealed to both state and federal government, wealthy individuals and opinion leaders to always consider the physically challenged people by providing them with employment or capital for start-ups, adding that there are a lot of people like him who are ready to work hard but they are always discouraged by the attitude of the society towards them.