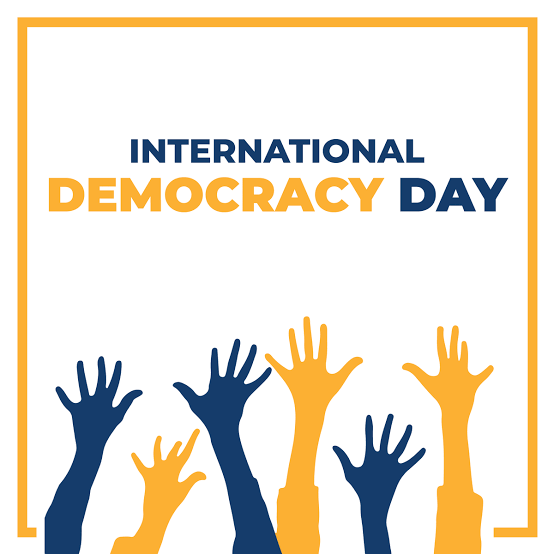 As the world commemorates International Democracy Day, one of a pro-democracy think tank, the Center for Democracy and Development (CDD), has reflected on 22 years of democracy in Nigeria, with the conclusion that citizens have made enormous sacrifices to ensure the survival of the government of the people by the people, and for the people.

Commending Nigerians for their resilience and perseverance, which has sustained the democratic system despite the myriad of challenges, CDD called for robust citizens’ participation to deepen accountability and ensure democracy works for all citizens while leaving no one behind.

In the Centre statement to mark International Democracy day, the CDD director, Idayat Hassan, called on Nigerians not to lose faith in democracy as it is a system that would present the best option for the country’s peace, stability and development.

Alluding to the 2021 International Democracy Day theme, “Strengthening democratic resilience in the face of future crises”, the CDD Director expressed optimism that despite the challenges confronting the democratic process, the group opined that Nigeria would overcome its nation-building challenges.

The CDD helmswoman also pointed to Nigeria’s strategic leadership and economic prominence in the continent and the world, especially its status as the country with the largest concentration of black people on earth and the biggest economy in Africa.

On how to address the challenges undermining democracy, human rights, and the rule of law, Hassan harped on the need to build strong and resilient institutions, respect the fundamental rights of citizens, and promote and protect freedom of expression and press.

According to her, as it is obtainable globally, strong institutions would emerge if a public value system is driven by credible leadership, integrity, freedom, accountability, and social justice.

The CDD helmswoman identified the Independent National Electoral Commission (INEC), and the Nigerian Police Force (NPF), and the Economic and Financial Crime Commission (EFCC) as some of the critical public institutions that have the potential to drive good governance in the country, if strengthened.

“Take a look at INEC, for example; it desires for the adoption of technology to conduct improved elections in the country. That is a pointer to the willingness of some of these institutions to ensure there are reforms. This is where the legislative and executive should support this aspiration to come to fruition,” she says.

On the attacks on civil liberties, including the right to free expression, Hassan called on the government to note that freedom of the press and citizens’ rights to express themselves freely are significant pillars of democracy. She said the government’s ban on the usage of Twitter and refusal to remove the prohibition exposes the move towards authoritarianism.

“Globally, technological innovations and adaptations, social media inclusive, are contributing tremendously to the cause of good governance and social good. And this is also reflective in the Nigerian experience, given the role social media has played in the electioneering campaigns and elections proper.

“Hence it is long overdue for the government to reverse the ban on Twitter. Twitter has remained one of the fertile grounds for idea incubation and strong advocacy for the right public policy and development, especially in Nigeria. Shutting it down for this length of time is inappropriate,” she said.

Weighing in on the threat of terrorism and the specific strategy of granting amnesty to repentant insurgents, Hassan called for a holistic approach with a comprehensive DDR plan but not foreclosing account
ability for heinous crimes committed by criminal groups.. Hassan similarly called for “the development of national peace infrastructures.

Physically challenged man got married to a beautiful bride

Persons Living With Disabilities Empowered With Cash and Materials in Lagos