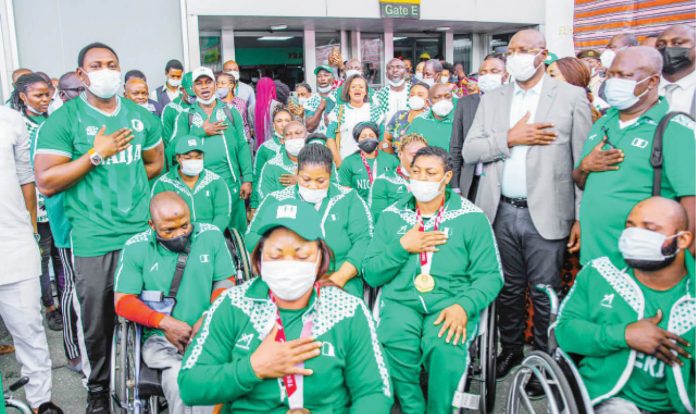 Minister of Sports, Sunday Dare and Daniel Amokachi singing the national anthem along with the victorious Nigerian Paralympians

As the curtains fall on the 2020 Tokyo Paralympics, my thoughts are dominated by the performance of Team Nigeria at the world’s largest games. The Paralympics Games are a major international multi-sport event where athletes with physical disabilities compete.

This includes athletes with mobility disabilities, amputations, blindness, and cerebral palsy. There are Winter and Summer Paralympics Games, which are held immediately following their respective Olympic Games, in the same host city.

For those who are not conversant with global sporting activities, it may not be easy to differentiate between Tokyo Olympics and Tokyo Paralympics which came to a close today, September 5, because a few weeks back, global attention was on the same Japanese city for the former event.

At the 2020 Tokyo Olympics, Team Nigeria presented 58 athletes who managed to come home with one silver and a bronze medal won by Blessing Oborodudu in female wrestling and Ese Brume in Long jump.

Before the games, the Minister of Sports, Sunday Dare raised the hopes of millions of Nigerians as he confidently said Team Nigeria will surpass its best Olympics outing which was achieved at Atlanta 1996.

Those who took in the Minister’s boisterous comment with a pinch of salt were eventually proved right as Team Nigeria in Tokyo fell completely short of the Atlanta performance.

However, most Nigerians who are conversant with the country’s participation in both the Olympics and Paralympics were not too agitated as they concluded that the Paralympians would sooner than later wipe away their tears.

Of course, it is now an open secret among Nigerians that whenever Team Olympics fail abysmally, Team Paralympics usually come to the rescue of the country. The unwavering faith in the physically challenged athletes is not unfounded as they have never failed to deliver the goods.

On Thursday, the first batch of the Paralympians who left the shores of Nigeria without fanfare returned from Tokyo with three gold medals, one silver and four bronze medals. And just yesterday, Flora Ugwunwa and Lauritta Onye added another gold and bronze medal in javelin and Shot Put respectively to bring the total number of medals from Tokyo to 10.

By the time the four gold, one silver and five bronze medals from Tokyo are added to the number from the previous seven appearances, the Paralympians silverware cabinet will be bulging with 80 medals.

For those who don’t know, the Paralympians have never had a barren outing. And they are yet to return from the Paralympics games without a gold medal. Unlike their Olympics counterpart, they have nothing to do with jamboree.

Therefore, it has become necessary for me to confess that I am very stingy with tears. I hardly shed either joyful or painful tears. No matter the weight of hurt or happiness, I do everything to put my emotions under control.

However, on August 29, my manliness failed woefully when the Nigerian National Anthem was sung in far away Tokyo for Bose Omolayo after her victory in the women’s 79kg powerlifting event.

It was indeed hard for me to restrain my tears because seated in a wheelchair with tears of joy rolling down her cheeks was my dear Bose who had defiled all the odds to not only reach the pinnacle of her career but make her country proud.

Like many other Nigerians, I had longed for the national anthem of Nigeria at the Tokyo Olympics. Unfortunately, such a moment as produced by Bose’s audacity never came.

The last time Nigeria’s national anthem was sung at the Olympics was at Atlanta 1996 Olympics when the stupendously talented Dream Team I, inspired by the legendary Kanu Nwankwo conquered Argentina in the finals of the football event.

My obsession with the Paralympians is that in Tokyo, despite their physical disabilities, they made it possible for Nigeria’s national anthem to be played thrice. If by this feat which even Steve Wonders can see, we still refuse to acknowledge the extra-ordinary contributions of these extra-ordinary human beings, then we certainly have stone-like hearts.

It is, therefore, my fervent hope that after sacrificing so much to bring glory to Nigeria, the Paralympians won’t be left in the cold again. They are usually not given the reward that is commensurate with what they have achieved.

Despite their accomplishments in the field of sports, most of these athletes still live in penury because they are assembled mostly when it is time to clear the mess left behind by the over-pampered Olympians. Their welfare is hardly a thing of priority.

For instance, immediately after the duo of Oborodudu and Brume won medals at the Tokyo Olympics, the Minister of Sports at an elaborate ceremony rewarded them in dollars. For the silver medal, Oborodudu received $10,000 while Brume’s bronze fetched her $7,500.

The same reward was promised to the Paralympians. Unfortunately, after winning four gold medals, one silver and five bronze medals, the Paralympians are yet to smile to the banks.

The last time I checked with the Sports Ministry, the ‘package for the victorious athletes was being processed’. This is not to question or doubt anyone’s sincerity but if I were the one with the knife and the yam, I would have first of all settled the physically challenged athletes. It is indeed disturbing and pathetic that after achieving so much in Tokyo, they will have to wait to be rewarded.

My patriotic verdict is, Paralympics or Olympics, gold is gold. The Paralympians who endure extremely difficult conditions to thrive where their compatriots fail woefully must be adequately celebrated and remunerated without further ado.

FGM can cause cerebral palsy, intellectual disability on babies – Expert

Inclusive Education and Persons with Intellectual Disability in Nigeria

FGM can cause cerebral palsy, intellectual disability on babies – Expert