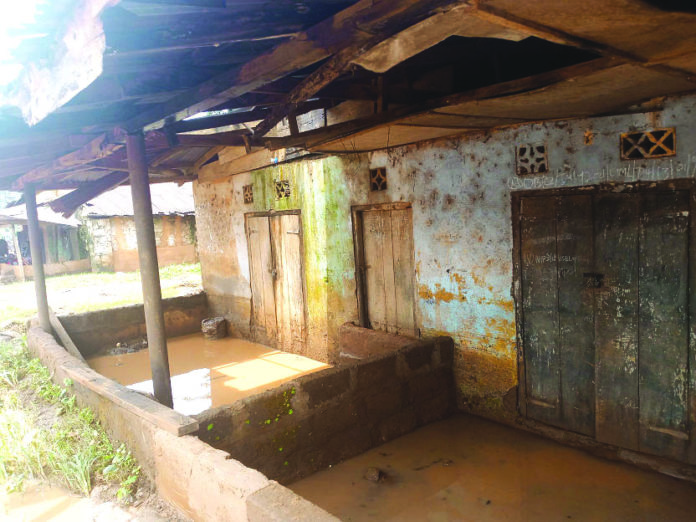 A building affected by the flood

Augustina Nwozuzu, a petty trader and resident of Amauzairi in Isiala Mbano Local Government Area of Imo State is seriously in pains not as a result of her disability following the injuries she sustained on her right leg years ago. She is in pain because of the flood which has swept away all her property at the early hours of Saturday, August 28 after a heavy downpour.

“The flood destroyed my ladies machine (motorcycle) which I used to move about because of the wound I have on my leg following the accident I had two years ago cannot allow me to walk about like other human beings. My fridge, stabilizer and generator were gone in the flood,” she cried.

Another victim of the flood, Mrs Chibuzo Enyioha, who sells fried plantain and akara at Okwele, told our correspondent that she has lost a bag of beans , yams and other items in the early morning flood on Saturday.

“Every year this flood has been disturbing us in this community, it has never been worst like this, I just bought a bag of beans on Friday, I kept it inside but look at what I’m seeing now, a soaked beans and the yams I can’t even find again. Many of our domesticate animals like goats, sheep and dogs were killed in the flood.

At least 20 houses, including stores and business premises, were submerged by flood at Amauzairi after the torrential rainfall.

Apart from the destruction, which the flood had wreaked on the community, the road is now completely impassable. From Amuuzairi one can assess Onitsha and Mgbidi without passing through Owerri, but now you cannot drive through the road with a motorcycle talk more of a car. It has been a hell of trouble for both indigenes and visitors.

The flood, according to a community leader from the area, Chief Collins Anoro, wreaked havoc mostly at Okwele sending most of the indigenes there relocating to neighbouring communities.

He estimated the properties and economic losses as a result of the flood to value over one hundred million naira.

“What we are saying is that we have been shouting of this particular menace, the government should come to our aid, we do not have roads. If these roads are constructed possibly we would have had drainage which would have controlled the flood. Luckily, we have a river of which if the flood had been channelled to it, it would have checked this flooding. But the point is that we have to shout without help. Before now we see politicians coming here to promise us heaven and Earth, Amauzairi is one community that they used for their campaign but today our road is impassable’

Anoro has threatened that Amauzairi may denounce its citizenship of the community if the state government does not urgently come to their aid.

He disclosed that the community leaders have resolved after a general meeting of the community recently over the continual flood incident to join a neighbouring Nwangele Local Government.

“We have decided we may relocate to Nwangele Local Government, nearer to us, since that is the only the passable road we have to Amauzairi, we can no longer access our own road except we go to Nwangele, the best thing is for everybody in the community to go to that place and stay.” Anoro lamented.

A bread factory in the heart of the community has since folded since the flood worsened two months ago.

The owner of the factory, Bernard Ezebuike, who confirmed the development when our correspondent visited the community, said he has given up on reactivating the bakery which employed over 18 workers.

“The vehicle I used to convey the pieces of bread to points of sale is gone, the factory has submerged with muds all over the places. I have lost every hope of regaining the factory. There is no point staying there again.”

Another victim of the flood, Nnadozie Onyeze, who sells types of cement, had over 100bags inside his shop before he travelled to Lagos. The villagers said nobody could break his store to rescue the types of cement.

“Everything was gone in the heavy downpour that soaked all the types of cement in the store because the shop owner travelled to Lagos for a business trip. Everything is gone,” a village leader, Thomas Ibe, said.

A philanthropist from the area, Chief Chikwem Onuoha, noted that the community has spent over N5 million on their own trying to ameliorate the flood but regretted that all their efforts crashed before their eyes after the last flood in the community.

The senator representing Okigwe North in the Senate, Senator Frank Ibezim, described the flooding in the area as pathetic, saying that the situation has been receiving the attention of all relevant government agencies.

“The situation has gone to the government and other relevant agencies to tackle the problem including the roads, not every rainy season the same situation will keep repeating itself. We have got a lot of Government agencies pit together and we are on top of it,” he said.