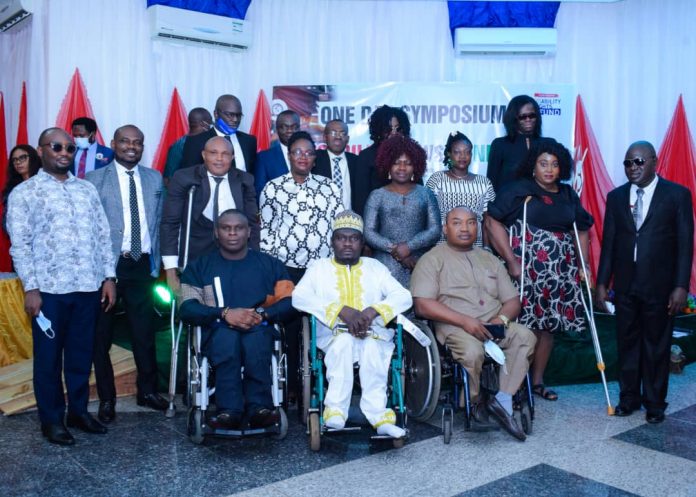 Stakeholders on Disability matters say they will no longer allow any state House of Assembly which refuses to domesticate the Disability laws to rest.

The stakeholders argued that domesticating the laws would provide a legal framework for the protection of persons with disabilities, which would as well improve their welfare.

They said it would consider every legitimate step at its disposal, including heading to courts to force such state legislatives to act.

Those were parts of the resolutions reached at the end of a one-day symposium on Disability laws in Nigeria on Thursday held in Enugu supported by Disability Rights Fund.

Read Also: ALDIN Begins Advocacy For The Domestication Of Disability ACT In Enugu

He said that persons with disabilities would be subjected to the whims and caprices of the society without legal protection.

Onwe noted that there was discrimination against Persons with disabilities (Prohibition) Act at the federal level and the disability laws of the various states.

According to him, states with disability laws include Plateau, Lagos, Rivers, Ondo, Bauchi, Adamawa, and Kano and expressed the optimism that Enugu state would soon join the league.

“We are not ignorant of the fact that it is not so all about mere enactment of laws, but of implementation of such laws.

“This symposium, therefore, is designed to be an annual event to continually brainstorm and come up with strategies for effective implementation of the disability legislations in Nigeria.

“And (it is) to encourage the non-compliant state to key into the development of legal framework for the protection of the rights of persons with disabilities in the interest of national development.

“Therefore, the importance of working with ALDIN by any disability-focused development agency, corporate body, government or individual cannot be over emphasized,” he noted.

Eze, represented by Mrs Obioma Okenyi, stressed that Enugu state had always been at the fore front in the issue that concerned the vulnerable in the society.

“This is evident in the domestication of the Child’s Right Act in the state as well as the violation against Persons (Prohibition) Act.

“It is believed that mechanism for the domestication of the Discrimination against Persons with Disabilities (Prohibition) Act will soon see the light of the day,” the commissioner promised.

Moneke emphasised that ALDIN in Anambra was ready to take any establishment, ministry or department that was not having a person with disability working with it to court, in line with the Disability Rights.

According to him, the domestication of the Disability Law will stop their members from begging the governor or the commissioner for what truly belongs to them.

In an interview, Rev. Fr. Lazarus Anieke, the Chaplain of Persons with Disability, Catholic Diocese of Enugu, advised the Enugu state government to look into the welfare of the persons with disability with a view to improving it.

While expressing regrets that the newly reconstructed bus-stops in the city were not disability-friendly, the cleric asked the state government not to do anything that would further dehumanise the persons with disabilities.

Trader in court for allegedly stealing property worth N2.2 million from...