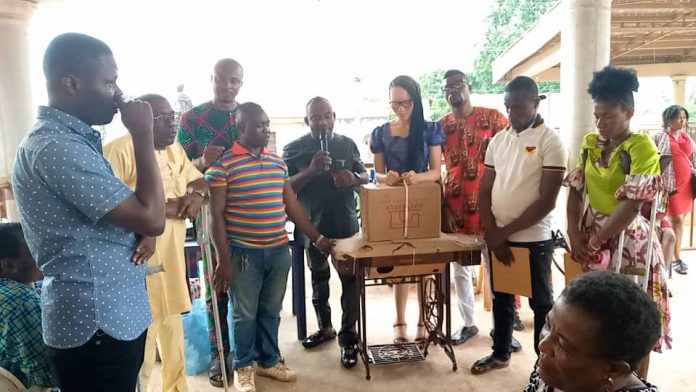 The Joint National Association of Persons With Disabilities (JONAPWD), Anambra State chapter, has, in efforts to generate jobs and improve living conditions of Persons with Disabilities empowered three members with cash donations and a sewing machine.

The donations were handed to the select beneficiaries at the chapter’s second quarter general meeting held on Saturday, July 11, 2021, with over 220 members of the association present. Dignitaries gracing the occasion included the Senior Special Assistant to the Governor on Utility, Barrister Victor Meju and Special Assistant to the Governor on Sign Language Communication Mr Collins Joseph.

Chairman of the association, Comrade Ugochukwu Ernest Okeke, in his address, remarked that the association was able to do the empowerment courtesy of subvention received from the Ministry of Women Affairs in 2019. He noted that the decision was made to empower 3 members from different clusters who have already learnt requisite skills.

Continuing, he remarked: “our aim for empowering you today is to encourage your efforts to survive while at same time providing the privilege and equipment to help us train other members. That way, we can achieve our target zero tolerance for street begging.

“Furthermore, we expect that you will take the time to employ some of our members who indicate interest in learning from the various skills you have acquired”, Comrade Ugochukwu noted.

Two members of the association, one from the visually impaired, and the other from Persons with Physical Disability each received a cash grant of N50,000. The third beneficiary, a Deaf member, got a sewing machine.

Responding, the beneficiaries thanked the association for counting them worthy of the privilege and promised to make judicious use of the grants. They also promised to empower Persons with Disabilities in the State.

In another news, a jingle funded by the European British Council for the Rule of Law and Anti-corruption (RoLAC) was released. The jingle is an official enlightenment campaign on the Anambra State Disability Rights Law (ASDRL). The jingle, which is available in English and Igbo will be used to sensitize the general public about the Disability Rights Law. It will be aired on various radio stations across the State.

INN also learnt that a member association of JONAPWD, the Anambra State Albinism Association (ASAA) was officially admitted to the body with their new chairperson, Miss Vivian Ezeonwumelu.

International Day of People with Disabilities: DWAN, Abuja Chapter, In A...