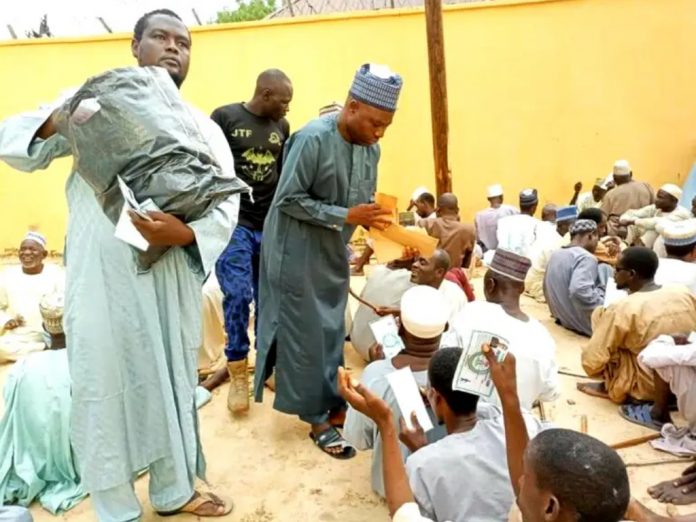 In preparation for the forthcoming Eid-Kabir Celebration, Governor Babagana Umara Zulum of Borno State has released over N100 million to be shared among various categories of People With Disabilities (PWDs).

The fund was part of the Monthly gesture initiated by the present administration, usually handled by the Commissioner Sport and Youth Development, Hon Saina Buba.

Zulum consolidated on his predecessor Senator Kashim Shettima’s administrative policy in paying monthly salaries on or before 25th of every month.

The over N100 million stipends initiated for vulnerable groups according to Commissioner Buba, are meant to cushion hardships in order to celebrate the emerging Eid El Kabir festivities.

This time around, the benefitting categories include 418 Deaf and Leprosy, while 454 physically challenged received N15,000 to N20,000 Naira Each, depending on the unfortunate situation.

Yesterday Morning, Hon Saina Buba who led members of his team to the Blind Workshop Centre in Maiduguri targeted 1,095 blind persons who have constraints in opening accounts, hence their payment was conducted in cash basis on the table.

Although, drama insued under strict supervision, when the Commissioner and Officials of the Ministry were able to detect and seized over three Hundred (300) fake tokens from unpatriotic persons which resulted in a shortfall during the payment of genuine beneficiaries.

This compelled the Commissioner to source for funds and addressed the issue immediately.

But to avert such situations in future, Hom Saina Buba, leader of the team, said, “strict process of payment will be adopted to avoid dublication or chaos in the system.”

Some of the beneficiaries expressed gratitude to governor Zulum for his passion to Civil servants and the vulnerable groups in the society.