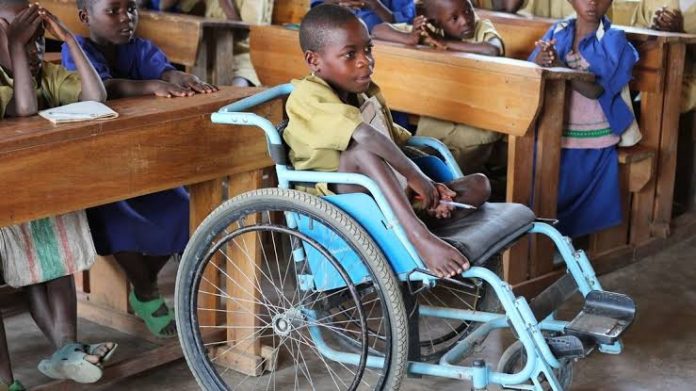 Children living with disabilities seek to live a normal life like their counterparts without challenges. However, more often than not, they suffer deprivation that denies them the rights to education, employment and exposes them to violence, stigmatisation, among others, DAMOLA KOLA-DARE reports.

“People should stop giving us money like beggars. They should encourage us and help fight for our rights. We are humans like them. We have the same brain, and parts of the body. They should play with us, relate with us and take pictures with us. We have equal rights like every other person in the world.”

Those were the words of Adebolu Adejobi, a young lad suffering from cerebral palsy, who spoke at an event organised by a non-governmental organisation (NGO), Iyaniwura Children Care Foundation (ICCF) and Lagos State government to celebrate children with disabilities in the state.

She urged the government to recognise persons with disabilities, stressing that the Sustainable Development Goals (SDGs) also favour their inclusion in societal life.

She said: “Persons with disabilities should be recognised as equal partners by government at all levels, civil society and other stakeholders. Of the 17 SDGs, seven targets have an explicit reference to persons with disabilities. Further, all goals and targets are applicable to them by simple virtue of universality which applies to all persons and the overarching principle of ‘leave no one behind’.

Speaking further on the fate of many children with disabilities, Mrs. Otitoloju said:

“Children with disability are most vulnerable, denied, abused and marginalised in the society from health, education, social protection, participation and general wellbeing for their survival and development.”

To get members of the society to respect the rights of children with disabilities, Mrs. Otitoloju said ICCF was planning a grassroots campaign.

“ICCF is taking this enlightenment campaign on Child’s Right Law to the grassroots with the aim of educating them on necessary steps to prevent an infringement on their rights, to promote the participation of children with disabilities as full members of society and discusses all aspects of their development, including access to education, health services and rehabilitation, social and legal assistance, play and cultural activities, vocational and life-skills training,” she said.

Statistics on children with disabilities

Available statistics reveals that between 93 million and 150 million children live with a disabilities worldwide. The World Health Organisation (WHO) and the World Bank estimate that in some countries “being disabled more than doubles the chance of never enrolling in school”. Also, an estimated one in three out-of-school children are said to have a disability.

Almost 50 per cent of such children are not in school, especially in developing countries like Nigeria.

A survey by Devex (a media platform for global development) revealed that determining the percentage of those with learning disabilities is almost impossible in the country as a result of non-existent data.

Therefore, any educational plan will perhaps not cater for the needs of those with disabilities, taking them further to the nadir of society.

Throughout Africa, less than 10 per cent of children with a disability receive primary education. But in some countries, only 13 per cent receive any form of education.

Experts note that in developing countries, people with disabilities are likely to be poorer than other adults. Missing out on education not only affects the quality of life for individuals and their families, it also has a negative economic implication for countries, they add.

A study by the International Labour Organisation (ILO) showed that countries lose between three and seven per cent of Gross Domestic Product (GDP) by excluding people with disabilities from the job market.

According to a study, discrimination against children with disabilities also results in reduced access to basic social amenities, and general lack of recognition. Addressing discrimination and promoting inclusion is crucial in all sectors, and can be achieved through information and advocacy, strengthening policies and facilitating access to services.

In January 2019, Nigeria signed into law a bill that prohibits discrimination against persons with disabilities, after many years of advocacy.

The law states that a person with disability shall have a right to education without segregation. It also stipulates that public educational establishments shall be run to be inclusive of and accessible to persons with disabilities.

In 2015, Nigeria adopted the National Policy on Special Needs Education. Further, the Child Rights Act outlines that every child has the right to free, compulsory and basic education.

In international circles, Nigeria has made a significant commitment to the right to education for children with disabilities by ratifying the UN Convention on the Rights of Persons with Disabilities.

The UN Convention on the Rights of Persons with Disabilities of 2006 has been ratified by 157 countries, which means they are committed to providing inclusive education to children with disabilities.

Sadly, despite these local and international laws and standards, many children with disabilities continue to face various forms of violence and disability-based discrimination and segregation.

Many countries are moving towards a system of inclusive education, which enables children with disabilities to be educated in local schools rather than separately. This requires robust changes to reduce and remove the barriers.

Experts say when people with disabilities get quality education, they are enabled to take up key positions in their communities, challenging stigmas and changing negative attitudes about their abilities.

According to them, education can help people with disabilities get increased access to employment, health and other services, and develop a better awareness of their rights.

A Clinical Psychologist at Ladoke Akintola University of Technology (LAUTECH), Oyo State, Dr. Oluwafisayo Adebimpe, noted that the government is in the best position to correct setbacks suffered by special persons by putting in place an enabling environment whereby disability will not be seen as a health problem but as a diverse experience which affects ability to survive and function effectively in the society.

According to her, overcoming the difficulties faced by people with disabilities, including the behavioural and psychological issues, requires removal of social and environmental barriers.

She said: “Disability is a complex phenomenon reflecting the interaction between features of a person’s body and the society in which the individual lives.

“Children with disabilities go through many challenges which need urgent attention. Among them are the physically challenged, some with intellectual impairment or learning disabilities, some with low vision or hard of hearing, while there are some with psycho-social impairment, mental health problems and other forms of disabilities.”

Adebimpe laments that the right measures are not in place to secure and protect the rights of special children.

“Most of them are deprived of their Nigeria Child Act Right which is to protect them. Unfortunately, the necessary measures are not put in place as expected. The Act is expected to protect these children irrespective of their physical or mental capabilities. Looking through the Child Act, 2003 Article 1, 7 and 8 clearly indicate the right to life, which behooves the Federal Government to support and create polices for child survival, protection and development.

“By extension, children with disabilities should also have access to education and health. But they are faced with discrimination among the populace because of their status.

These eventually lead to stigmatisation causing identity crises among their peers/contemporaries. These are evident in their non-acceptance into schools but rather into “special schools”.

The inability of these children to have access basic necessities to education, security, health care, social life and accommodation makes it more challenging for the children, parents and caregiver, not forgetting the burden and financial implications,” she added.