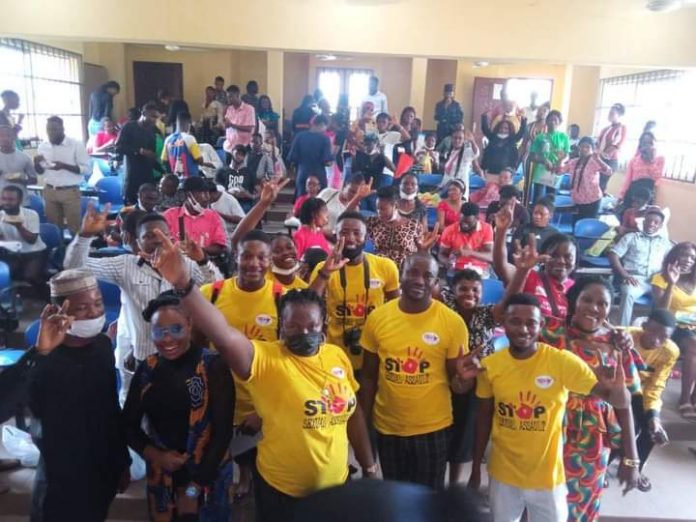 No less than a hundred students (mostly girls) recently received specialized training facilitated by the Deaf Women Aloud Initiative to bring an end to Gender-Based Violence (GBV) and Sexual and Reproductive Health and Rights, SRHR.

The training was part of a project tagged: “My Body, My Rights & My Deafness” led by the executive director, Hellen Udoye Beyioku-Alase, with over 100 University of Calabar students as participants.

The customized training exposed them to various issues surrounding gender-based violence, SRHR, and the rights of women and girls with Disabilities. It also focused on rape, rights violation of women and girls, what to do when physically or sexually assaulted, how to report gender-based violence cases, as well as who to report to. The event ended with a practical interactive session.

Some of the participants, once victim of sexual violence, opened up and shared their life stories. According to them, they kept quiet after falling victim because they didn’t know what to do, what line of action to take and who to report their cases to. This, it was noted resulted from a lack of awareness.

Through the enlightening program, DWAI was able to open the minds of participants and show them the way. Distress call numbers in cases of were given to the participants. The program was sponsored by DEwrop foundation, CREA, Maria stopes, Studio 24 with supported from National University Deaf Students Association (NUDESA) and Executives of Cross River Association Of The Deaf.

Dignitaries present at the event were Mr. Ini-Odu Akpan who represented the Permanent Secretary, Federal Ministry of Women Affairs, Barr. Ann A., chairperson of FIDA Calabar chapter, and Mr. Eyako Godwin from NAPTIP.

DWAI also used the opportunity to pay advocacy visit to the Chairperson of International Federation of Women Lawyers (FIDA), along with a female victim of domestic violence. The Deaf women group pleaded for opportunity to collaborate with the FIDA to boost the cause of victims of GBV and other vulnerable groups.

In response, the FIDA promised to look into the case and bring the perpetrators to book. They also expressed passionate interest to work with DWAI, an organization committed to ending gender-based violence. DWAI also received positive responses from NAPTIP, with a promise of collaboration.

INN learnt that with the training at the University of Calabar, Cross River State, concluded, DWAI moved to Federal College of Education Special, Oyo, where it conducted another training for Deaf students.