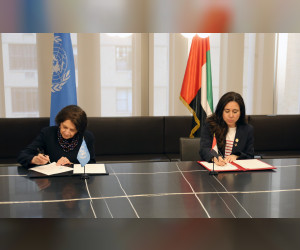 The United Arab Emirates (UAE) and the United Nations Department of Political and Peacebuilding Affairs (DPPA) announced the signing of an agreement to support the implementation of the Women, Peace and Security (WPS) agenda, as well as to enhance the voices of women, youth, and persons with disabilities in UN-assisted peace processes.

The two-year contribution of USD 800,000 from the UAE will help fund DPPA projects to increase women’s meaningful participation in peace and post-conflict processes, namely through decision-making and mediation roles in line with the landmark UN Security Council Resolution 1325 (2000), which established the WPS agenda. Women’s leadership in such processes increases the sustainability of peace agreements and enhances economic growth in the aftermath of conflict. The contribution will also be dedicated to providing support in mediation and peace and dialogue processes around the world.

H.E. Lana Nusseibeh, Ambassador and Permanent Representative of the UAE to the UN, signed the agreement on behalf of the UAE, and Rosemary DiCarlo, Under-Secretary-General for Political and Peacebuilding Affairs, signed on behalf of DPPA.

“Enhancing women’s full and meaningful participation in peace and security matters is vital for effective 21st century peacebuilding, conflict prevention, and recovery,” said Ambassador Nusseibeh. “Building on the UAE’s longstanding commitment to the WPS agenda, our partnership with DPPA helps to ensure that peace processes will deliver long-term security and economic benefits by including and empowering women. Advancing the role of women as community and business leaders is a core pillar of the UAE’s vision for a UN Security Council seat in the 2022-2023 term.”

“WPS is such an important part of our work because we know from experience that when women are at the table, peace agreements are more likely to hold and the benefits of peace are enjoyed more broadly,” said Under-Secretary-General DiCarlo. “The support of the UAE is invaluable. Such contributions allow us to make a difference in peace and mediation efforts globally.”

Putting women at the front of all peace and security efforts, including conflict prevention and resolution, peacekeeping and peacebuilding, is a longstanding foreign policy priority of the UAE. In 2019, the UAE and UN Women launched the Sheikha Fatima bint Mubarak WPS Initiative, which has trained more than 300 women cadets from the Arab region, Asia, and Africa so far, and aims to increase women’s representation and their full, equal, and meaningful inclusion in the security sector.