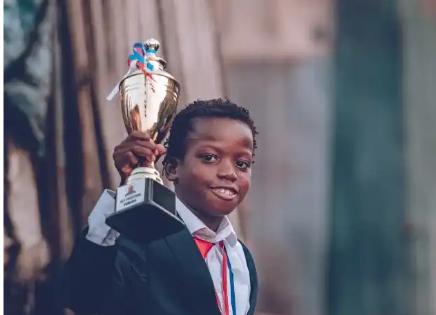 Fredinard is suffering from spastic cerebral palsy, a developmental disorder caused by damage to the brain which could make simple tasks challenging for those affected.

Like many children in the slum, Fredinard and his siblings could not go to school because of poverty.

His father, a fisherman, and his mother, a petty trader, could barely provide enough to feed their family. But the little boy, with dreamy eyes, was determined to brace the odds.

The precocious kid has started to pull the weight of fame ever since Chess in slums Africa, a non-profit organisation known for using the game as a framework to promote education and raise champions from low communities, visited his slum.

According to Tunde Onakayo, founder of the organisation, Fredinard was invited by his team for training after his peers were seen mocking him because of his health condition.

It wasn’t long after the training started before the talented kid stunned the organisers with his rare understanding of chess through pattern recognition.

“Today we discovered a boy with Spastic cerebral palsy being mocked by his peers, we brought him into our training center and introduced him to Chess. Few minutes into learning board arrangement and pawn movements, he outperformed everyone in his class,” Onakayo said when the training started in April.

“The boy’s name is Fredinard and he’s a differently-abled child. With tremendous burdens, often comes enormous gifts. I think Fredinard just found his gift of chess and there’s no limit to what he can attain with this.

“He doesn’t speak any English word and has never been to school before, but today he showed a rare understanding of chess through pattern recognition. The real superheroes live in the hearts of these little children like Fredinard fighting big battles.”

Onakayo explained that few minutes after his first session with them, he knew that Fredinard was born to play chess as he was able to solve complex Knight move geometry.

“It didn’t take long to realise that Fredinard was perhaps a savant when I gave him a complex Knight move geometry to solve few minutes after teaching him the basic movement of the Knight piece. This in itself is an extraordinary feat, even for a genius. He was born to play chess,” he added.

He continued his impressive run during the intense weeks of training sessions and eventually won a tournament dedicated to test the children’s understanding of chess and celebrate excellence.

“After two intense weeks of chess lessons in the slums of Makoko, we held a tournament to test their understanding of the game and celebrate their excellence. The miracle child with Cerebral palsy Fredinard Won with a phenomenal performance. A star is born,” Onakayo said.

His feat has not only fetched him popularity but also got him a scholarship to support his education.

“For a child with such incredible gift, it broke my heart to learn that he and his siblings have never had any form of formal education. The @chessinslums has decided to put Fredinard on scholarship support, and will continue to sponsor his education for as long as possible,” the group’s founder added.

“For the little boy with dreamy eyes, this is just the beginning of his beautiful story. In those two weeks where we taught him chess, I never heard him speak an English word but on the final day of the tournament when he held up his trophy, he muttered the word ‘champion”.

From relative obscurity, Fredinard has become a sensation in his community and an inspiration to those battling a similar health condition.

Onakayo revealed that with the success of the organisation’s training in the area, efforts are ongoing to ensure 100 children in the community go to school.

“The Makoko Chess dream was a resounding success by every metric. We introduced the magic of chess to 30 children from being complete beginners who had never seen a chess board before to competing and showcasing the gift of chess that they had just discovered,” he said.

“In the two weeks spent in Makoko, we profiled about a 100 children who do not go to school and we’re kickstarting a global campaign to get them back to school and establish a Chess center in their community. It is possible to do great things from a small place.”

He also talked about his organisation’s quest to give children in slums, who have been denied of many opportunities, access to education and more exposure.

“A slum is just a place, it doesn’t define the people who live there. This is why we must be relentless in our fight to create an equitable future for these children who have been marginalized for so long. To let them know that their dreams are valid too,” he added.

“We had a revolutionary idea to Make suits for the boys and dresses for the girls(Inspired by The queen’s gambit) to tell a new narrative of children in the slums that is not just one of poverty, but an image of what is possible if they’re given equal opportunities to excel.”

Foundation hosts over 2,000 children in her annual Children’s Charity Concert...