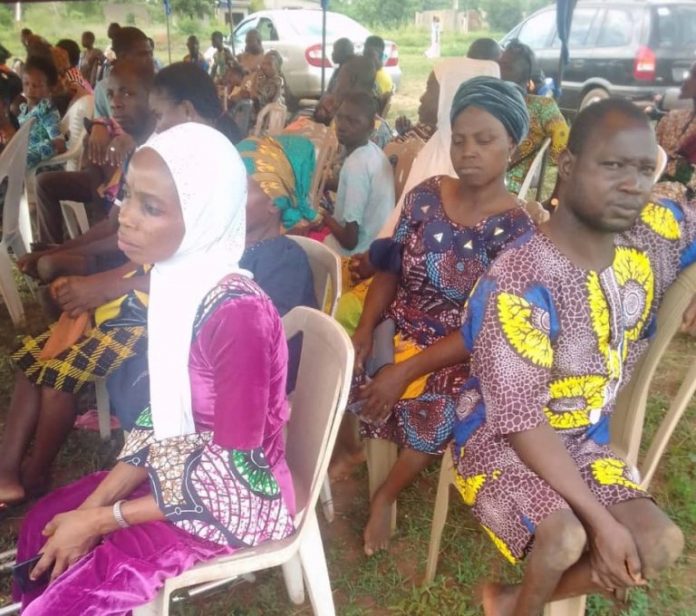 The traditional ruler of Imala town located in Abeokuta North Local Government Area of Ogun State, Oba Adegboyega Olabode has put smiles on the faces of persons with Disabilities in his domain with the provision of aided materials and working tools for them.

The monarch facilitated the donations as part of his 16th coronation anniversary held in the town, inviting over 100 People With Disability as Special Guests of Honour.

The monarch also invited his long time American friend,Pro Gary Maxey to help in the distributions of the items to the needy, who also converged on the town to celebrate with their royal father

A beneficiary, Kuburat Adenle, 40-year old physically challenged mother of one who has been affected from birth by poliomyelitis, could not hide her excitement in commending the monarch for the gestures.

“There are lots of businesses and vocations that I can do but moving from one place to the other is stressful for me. With this gift now, I am overjoyed that my pains will be very much reduced. I can help myself with a few things doing and contribute to my society. I thank Kabiyesi and the donors for this gesture”.

The Nurse turned monarch said he had been showing leadership by example so that well meaning individuals and groups could come to the aid of the community and its growing number of youths.

The royal father, who was founding Secretary of the National Association of Nigerian Nurses and Midwives (NANNM), further explained that, the reason for focusing the anniversary on youth empowerment including the provisions of tricycles for the disabled and training in various skills.

Olabode called on Ogun State Government to fulfill its promises to the people of Imala by ensuring security, reconstruction of roads and rehabilitation of schools just as he asked for meaningful grants and aids for farmers who are predominant residents to tackle the present high cost of food in the country.

The monarch pointed out that Imala as an ancient town occupied a prestigious position in the history of Yoruba and Nigeria had been neglected by successive governments denying it well deserved and needed infrastructure.

He expressed appreciation to Beautiful Gate and its funding supporters in America as well as Hadassah, a Redeemed Christian Church of God’s Non-Governmental Organisation(NGO) which provided one week skills acquisition training for about 50 young men and women who also displayed their new skills at the occasion.

The American guest at the ceremony in her remarks, noted the exemplary leadership qualities and philanthropy of the traditional ruler, adding that the motivation behind the gestures could be traced to event of the miracle at the Beautiful Gate in the Bible and the story of Mr Ayuba Gufwan, a physical challenge who started schooling late at 19 but rose to become a lawyer and founded the Non Governmental Organisation(NGO) named Beautiful Gate that produced and donated the tricycles.

“Today we may not be able to perform that same miracle here, but what we are going to do is the next best thing—we are here to give mobility to all of these who cannot walk as the rest of us do”.

“As I have already noted, most of the funding for these wheelchairs has been generously given by Christian believers in many churches in America. The wheelchairs are freely given out to both Christians and Muslims, in the love of Jesus, for Jesus has taught us to be compassionate to the poor, the crippled and the blind”, he said.

The Chief Executive Officer of Beautiful Gate, Ayuba Gufwan in his own speech advised the beneficiaries to maintain the tricycles very well, noting that the parts were locally sourced from common bicycle parts to enhance durability.

Gufwan called on parents not to lose hope in their disabled children as they may live to achieve whatever any able bodied person could achieve, and equally encouraged People With Disability, to always be focused in realizing their dreams to attain the top.

“There is ability in disability. For you to realise your full potentials you must make your mind strong and see yourselves like me in whom parents lost hope because of my disability but I pulled myself together till I got a degree in Law from the University of Jos. You can also do it”, he emphasised

Deaf student kills self after girlfriend refused to have sex with...