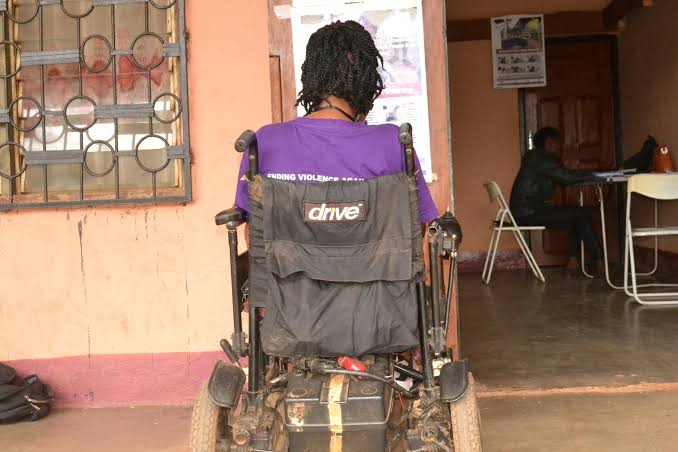 Unfortunately, violence has been with man since time immemorial and the recent history of mankind has witnessed an unprecedented surge in “creative” violent stories, written in blood and the sheer pain of victims and survivors – most of whom, left by society, are struggling to live with or through their chequered experiences. According to the World Health Organisation (WHO), violence is “The intentional use of physical force or power, threatened or actual, against oneself, another person or against a group or community, that either results in or has a high likelihood of resulting in injury, death, psychological harm, maldevelopment or deprivation.”

While it is well documented that Persons With Disabilities (PWDs), like other protected or vulnerable groups, are often subjected to physical (visible) abuse, it is the invisible, less visible, or psychological violence that has been, by far, normalised, culturised, and often minimised. Yet, it is no less devastating in its effect. Worse still, PWDs experience psychological disability-based violence (DBV) not only from strangers or the outside world but also from their immediate environment – family, friends, and caregivers. As Gro Harlem Brundtland succinctly puts it; “To many people, staying out of harm’s way is a matter of locking doors and windows and avoiding dangerous places. To others, escape is not possible. The threat of violence is behind those doors – well hidden from public view.” This is the story of Mr. Tergbaya (not his real name), a person living with a disability in Benue State.
“Growing up as a physically challenged child in Benue State was tough. I was laughed at, insulted, mocked, bullied in school and when walking on the streets. One of the incidents happened in 1996 when I was in JSS 2; a senior who was in SS 2 told me that I was a beggar and would continue to be. He said those words to me just because I prevented him from unjustly punishing a classmate. It took me 15 years after to get over this verbal attack.”

Again, unfortunately, Mr. Tergbaya is not alone in this. According to the WHO’s “15 percent rule,” about 1 billion people live with disabilities globally. In the case of Nigeria, more than 30 million Nigerians live with disabilities. And as of 2016, over 861 thousand persons lived with disabilities in Benue State. In Benue State, as is the case all over Nigeria, it is perhaps “normal” to subject PWDs to all kinds of psychological violence or abuse – consisting in verbal insult, blaming, shaming, gaslighting, name-calling, rejection, dismissiveness, bullying, manipulation, infantilisation, minimisation, withholding, destruction of property, deprivation, and other aggressing, degrading, humiliating, and intimidating treatments and/or threats.

Read Also: Rights of Lawyers with Disabilities in Nigeria: How Long Must Charity Continue?

The threat to deny, withhold or deprive, or actual denial, withholding, or deprivation cut across all amenities of life, including liberty, food, shelter, and education. And the overwhelming ruinous effect of this is perhaps exacerbated when it comes from one’s family.

“My mum has been my backbone. She single-handedly sponsored my education from primary to tertiary. My father blatantly refused to send me to school. On two occasions he said; ‘I see no reason to waste my resources on him’. He made the statement when my mother requested that I should be enrolled in elementary school. When I was in 300 level in BSU [Benue State University] and needed N30,000 to pay school fee, my mother approached him for assistance and he said; ‘if he cannot pay his school fee, ask him to come back, I will buy a plate for him to be begging on the streets, physically challenged persons don’t go to school.’”

The “normalisation culture,” entrenched and transmitted through myths, is just one of the many factors accounting for why PWDs are easily targetted for psychological violence. This culture has not only preponderated the balance of power in favour of the abusers or violators, robbing the victims of the willpower to resist, it has also ensured that the ravaging effects of such abuse are constantly minimised. This is perhaps the bigger tragedy. When violence becomes a funfair in any society, no one would be free from the eventual domino effect.

“I lived in the BSU boys hostel for four years out of the five years I spent in school. While living in the hostel, I contracted a skin infection but I noticed it in the first semester of my final year. Instead of my hostel and schoolmates being sympathetic and supportive, they chose to bully me. They went to the extent of name calling, hanging around lecture and exam halls to distract me from lectures and exams respectively. Their intention was to ensure that I spilled over. These were young men and women with whom I had no personal interaction or vendetta. But they chose to disgrace, abuse, insult, and humiliate me because of my disability.”

Read Also: Towards an Inclusive Covid-19 Vaccine Distribution and Administration

Still, the biggest tragedy perhaps lies in bearing the burden of psychological DBV. In Nigeria, it is estimated (according to WHO) that 20 to 30 percent, that is 41,200,000 to 68,800,000 of Nigerians, suffer from mental health deficiencies. And because of the paucity of data, since PWDs are 4 to 10 times more likely to be victims of violence than their counterparts without disabilities (Sobsey, et al., 1995), it is perhaps safe to say that they constitute a considerable percentage of these numbers. PWDs often suffer from depression, trauma, anxiety, low self-esteem, post-traumatic stress disorder, including but not limited to, hypervigilance, intrusive imagery, isolation, and avoidance behaviour/syndrome. These in turn affect their emotional, psychological, and social well-being. And in certain extreme cases, it could result in deaths, suicidal thoughts, and even suicides. A double-edged sword, psychological DBV is not only violence in itself, it could induce self-inflicted violence.
“I felt rejected by those who were supposed to show me love, support, and encouragement and I saw myself as less than a human. At the height of the abuses in BSU, I became truant and self-isolated, avoiding large gatherings, including lectures. This affected my performance so much that I contemplated dropping out of school in the second semester of my final year. The abuses changed my personality completely. I hardly believe or trust people now.”

Despite the enactment of protective laws, including the Violence Against Persons (Prohibition) Law of Benue State (VAPL), which is an adoption of the Violence Against Persons (Prohibition) Act, 2015 (VAPA), it is not yet ututu (morning) for PWDs living in the state. The VAPA expressly prohibits and criminalises all forms of violence – including emotional, verbal, and psychological abuse (Section 14) and intimidation (Section 18) – against any person, including PWDs, in private and public life. Section 46 defines “emotional, verbal, and psychological abuse” as a pattern of degrading or humiliating conduct towards any person [e.g. PWDs], including but not limited to – (a) repeated insults, (b) ridicule or name-calling, (c) repeated threats to cause emotional pain and (d) the repeated exhibition of obsessive possessiveness, which is of such a nature as to constitute a serious invasion of such a person’s privacy, liberty, and integrity. Yet, concerning PWDs and psychological DBV, this writer is not aware of any prosecution under the VAPL at this time, even as PWDs in the state continue to experience psychological DBV. More so, many in the state don’t even know about the existence of this law.

Notwithstanding the dynamics of psychological DBV, we can defeat it. And yes, we can. The invisible everyday suffering of PWDs in Benue State, a fortiori, Nigeria, must be of concern to all stakeholders. The government, civil society organisations, organisations of persons with disabilities, traditional rulers/chiefs, police, academia, and other local, national, and international development partners must play a part in significantly mitigating, if not eliminating, this societal burden. Deliberate and intentional effort should be made towards the enforcement/implementation of the VAPL, especially as it concerns PWDs. Awareness of the dangers of psychological DBV to both abusers or violators and victims or survivors should be zealously pursued. The public, parents, and caregivers of PWDs should be specifically sensitised on the criminalisation of psychological DBV. Also, effective and adequate professional support should be provided to PWDs who are victims of psychological DBV as required under the law.

In the final analysis, beyond tolerance, adjustment, and accommodation, we must predicate our interactions with PWDs on mutual or reciprocal respect. This is the only road worth taking – one that leads to inclusive and sustainable cities or communities. As Nelson Mandela posited, “We must address the roots of violence. Only then will we transform the past century’s legacy [“culture of violence”] from a crushing burden into a cautionary lesson.” The time to act is now. Take positive action!
.
Bizibrains Okpeh is a lawyer and a disability rights advocate. Reach him at bizibrains@gmail.com. This article was sponsored by the Inclusive Friends Association, IFA, with support from the Ford Foundation.